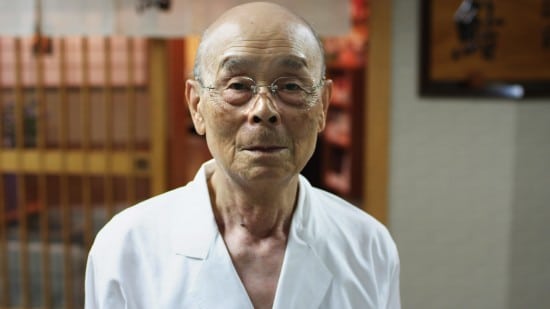 For any self-professed sushi nut, this film is a must see. Jiro One is a legend in his own lifetime; a man devoted to the creation and serving of sushi for 75 years from the basement of a faceless Tokyo office building in a restaurant that only seats ten. The sushi is served up in specific order and you are expected to demolish it piece by piece, under his rather intimidating gaze in about 15minutes flat, shelling-out something like £300 for the privilege. That makes this one of the most expensive restaurants in the world.

What is remarkable though is the skill, dedication and thought that has gone into a meal. And the rest of the world has recognised this: Jiro’s tiny, unassuming Sukiyabashi Jiro sushi bar has garnered all three Michelin Stars and, as the makers of this film attest, global recognition.

Jiro One is one of the old school; a believer in hard work, total commitment and dedication to a chosen field, whatever it may be. To serve an apprenticeship under Jiro is to spend ten years of dedicated to the most gruelling, repetitive, thankless work in the kitchen, learning the trade. And all this against the prevailing tide of today’s theme of growing fat doing the minimum with little application or indeed mastery in any field, all the while aspiring to coin maximum cash.

The title alludes to Jiro as a young man dreaming of making not just sushi but the best sushi. This film illustrates how Jiro never believes he has arrived, and that there is always room for improvement be it in the choice of the fish, the preparation of the rice, or the serving of the sushi. In doing so it opens out the film as an allegory or lesson in life and how best to live it. But also demonstrates how hard it must be for his sons to live under the shadow of a man who has truly reached the pinnacle of his profession, even if he himself doesn’t see it as so.

Food and film often make for successful lovers and any gourmand who truly appreciates the subtleties and depth of haute cuisine will relish this one. Make sure to eat beforehand or you will find yourself scrambling to a sushi bar straight after, only to feel all but affronted that it isn’t Jiro’s hand that serves up a concerto in seafood for, hereafter, nothing else will do. AT