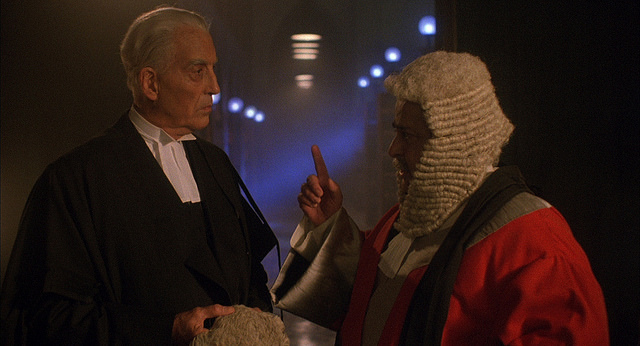 Director/co-writer Jamil Dehlavi (Seven lucky Gods) has created a lively bio-pic of Mohammed Ali Jinnah (1876-1948), the founder of modern Pakistan. Aesthetically close to David Lean, and with a towering Christopher Lee in the title role, JINNAH serves the audience well for information and entertainment.

Jinnah (Lee) is dying of tuberculosis in an ambulance in 1948, being looked after by his sister Fatima (Shah). After his death he wakes up in an office where a clerk (Kapoor) is supposed to judge his life – alas, the files have been transferred to a computer, which is not working. The guide, very much in the manner of his equivalent in Lubitsch’ Heaven Can Wait, now accompanies Jinnah through his life, with the older man watching his younger self (Lintern) marry the beautiful teenager Ruttie (Varma) during his fight in the early struggle for independence from the British Empire. But Ruttie dies young of cancer after giving birth to their daughter Dina, and Jinnah falls under the spell of his sister Fatima for the rest of his life. Jinnah has neglected his wife, fighting early battles with Ghandi (Dastor) and Nehru (Ashby) – the latter having an affair with Lady Edwina Mountbatten (Aiken) the wife of the – rather vain – Viceroy (Fox). There are many violent clashes between the independence fighters and the British army, but also bloodshed between the two rival factions. Ghandi is, for once, not shown as a martyr but foremost as a clever politician who uses his wile to out-manoeuvre Jinnah, by offering him the premiership of an independent India in the full knowledge that Jinnah would be at the mercy of the Hindi majority in the country. But Jinnah fights successful for the partition of the country into India and Pakistan, dying a year after independence.

DoP Nicholas Knowland uses lush colours and wide panoramic shots, very much like Freddie Francis for Lean, creating a melancholic atmosphere, where Jinnah’s successful political struggle is overshadowed by his personal loneliness; escalating into a fight with his daughter Dina who wants to marry a Hindu – just like her father – who denies her the same right. The Edwina/Nehru side-story is the only weak aspect of the narrative, coming over like a parody, rather than a plausible element. There are many speeches but they are (for once) necessary, explaining the background for the final partition. Lee’s Jinnah comes over a mature statesman, scolding his compatriots for intolerance towards other religions and women. Overall, the strong cast supports Lee in making JINNAH into an emotional and intellectually convincing epic about love, politics and war. AS

NOW AVAILABLE COURTESY OF EUREKA MASTERS OF CINEMA ON AMAZON