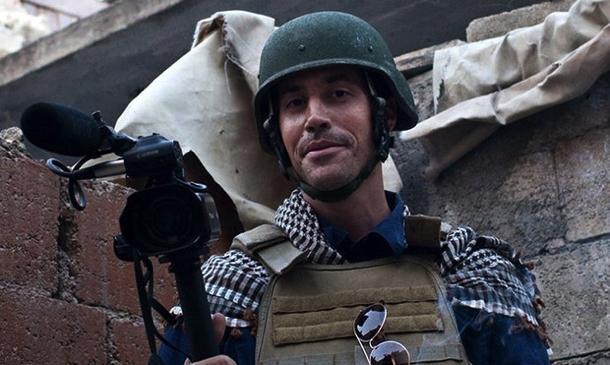 First time feature documentary director/co-writer Brian Oakes’ portrait of conflict journalist James Foley, whose  execution by ISIS in northern Syria on August 19th 2014 was videoed by the terrorists and went viral, is a passionate portrait of a man who tried to give voice to the many who have none. Oakes, like co-writer Heather McDonald, is a childhood friend of ‘Jim’ Foley, and has wisely not included the sensationalist clip in his documentary, stating that he “never watched it and probably never will”.

James Foley was born in 1973, the oldest of five children who grew up in quaint, middleclass surroundings in Wolfeboro, New Hampshire. After his studies at Marquette University in Wisconsin, he worked for four years with ‘Teach for America’ in inner-city schools in Phoenix/Arizona. Whilst doing his MA in writing at the university of Massachusetts, he taught English to inmates of Cook County Jail. Becoming a conflict journalist in Afghanistan, Libya (where he was hold hostage for 44 days by Gadaffi’s forces) and finally Syria, he found yet another way to help those worse off than himself, in this case Syrians, who were at the mercy of Bashar-al-Assad’s regime and the growing terror of ISIS. He lived with Syrian citizens, gained their confidence and reported home. He was abducted in November 2012 in Syria, and held hostage with other conflict journalists (many of them were released) for nineteen months.

Oakes interviews colleagues of Foley and their stories are anything but heroic. Many full time journalists and photographers had been made redundant by their media outlets in the US, and the freelancers had to fight to make a living – whilst also being in a war zone; often mistrusted and constantly under threat by the forces whose war crimes they were reporting. Foley’s own videos are very much proof of this. Nicole Tung, who often worked with Jim, states that “conflict journalists are the intimate chroniclers of conflict.” She talks about their day-to-day life, playing with Syrian children, capturing the life of the communities, as they were destroyed by outside forces.

Oakes has recreated some scenes from captivity, with some of Foley’s co-prisoners giving harrowing testaments of their physical and psychological torture. But they also tell about their small victories: like inventing a simple board game, and playing it with such passion that they totally forgot where they were. These black-and-white images shot in shadows, support the emotional content of the narrative.

Interviews with family members (and videos about the siblings growing up together) show Jim as very much at odds with his socially adjusted family. There is still so much regret that they did not know him better. Jim was foremost a moralist, somebody who never owned a property, particularly valued material possessions. He was a nomad who identified himself with the victims of society, wherever he went.

The James Foley Story is a testament to a man who had not only the physical, but also the moral courage to live in war zones. It is only fitting that the James W. Foley Foundation is a living legacy of this brave humanitarian. AS

OUT ON GENERAL RELEASE FROM 2 SEPTEMBER 2016