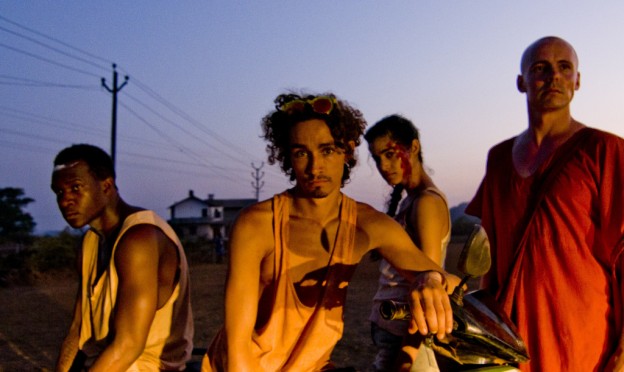 JET TRASH isn’t exactly trash: the title refers to the aimless young drifters who arrive in India to ‘find themselves’, often finding themselves in more dubious circumstances, as they do here in Scottish filmmaker Charles Henri Belleville’s second roadie title – his debut one was The Inheritance. Gorgeously lurid and party-loving is how the billing describes this stylishly psychaedelic back-packer thriller that’s schematically plotted but well performed by a promising cast of British actors, amongst them the mesmerising Robert Sheehan. The takeaway is Belleville’s stunning ability to re-package quite ordinary material into something glamorously hedonistic and fun, albeit rather glib.

Aimed at the ‘millennial’ crowd and based on his book ‘Go’, Simon Lewis co-scripts with Dan M Brown to evoke the contempo zeitgeist where brash and privileged Brits ease themselves into adulthood not by hard work and entrepreneurial endeavour but by an infinitely more unimaginative and streetwise mix of drug-dealing and marrying for money (of the passport variety). The result is an under-scripted affair that leads its impressive cast on a predictable dance rather than an exciting journey.

Waking up on Christmas Day on a palm-fringed caster sugar beach was always going to be preferable to a wet one-bedder in Harlesden or some inner city tower block. And this is where our unappetising lead duo find themselves, after a dip and ‘one off the wrist’ in the crystal waters of Goa. Lee (Sheehan) and Sol (Osy Ikhile) have fetched up here courtesy of Sol trousering £17,000 in a dodgy marriage deal – to one Adeze (Adedayo), all pimped by the venal villain Marlowe (Craig Parkinson) who has knocked up his girlfriend Vix (Sofia Boutella) to keep her under control. Sadly, a sacred cow gets involved and, being India, the fallout is pivotal to the storyline of a sassy thriller that never takes itself too seriously and is all style over substance, but strangely none the worse for it.

By all accounts the cast and crew had a lovely time filming JET TRASH and it looks stunning too thanks to Maja Zamojda’s sumptuous cinematography and Laura Ellis Cricks’ vibrant set design. JET TRASH is just that: See it as a bit of a knees up and you won’t come away disappointed. MT