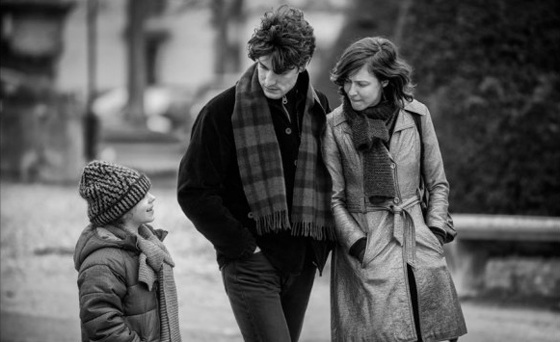 Louis Garrel stars as….Louis Garrel in an out of love in this slim family drama which also stars Anna Mouglalis (as his lover) and was directed by his father Philippe Garrel. With its themes of infidelity and financial instability it is inspired by the auteur’s own childhood: his father Maurice Garrel also left his mother for another actress.  Ester Garrel (Louis’ sister) also has a small supporting role as his screen sister.  Shot in stylish black and white, the film is a dialogue heavy and the brooding Louis rarely smiles as he plays a married man who leaves his wife Clothilde and young child for a lover, emerging a troubled soul fraught with indecision and insecurity, obviously emotions that he experienced a great deal as a child.

Spying through the keyhole, Louis and Clothilde’s little daughter Charlotte witness her parents arguing and deciding to split up, against her mother’s wishes.  Clearly unable to support his family through his acting career, Louis leaves to be with Claudia (Mouglalis) also an struggling actress but the couple are clearly no better off financially and argue over money in their tiny bedsit. Despite their obvious sexual attraction, the stresses and strains of impecunity very soon start to effect their relationship and further infidelities ensue. Claudia is the archetypal neurotic diva but strangely hits if off with Charlotte and the little girl conveys her delight to her mother know in no uncertain terms declaring Claudia “absolutely awesome”.

Claudia suggests the two of them move to a larger apartment given to her by an ex but Louis is naturally deeply jealous and attempts to take his own life.  There’s a great deal of emotional to-ing and fro-ing with Claudia clearly the stronger of the couple and both give convincing performances. The story feels quite realistic as a retro mood piece nicely enhanced by Jean-Louis Aubert atmospheric score and Willy Kurant’s delightful visuals: Paris, romance, indecision, jealousy, betrayal, longing: all achingly believable but also predictably tedious. MT