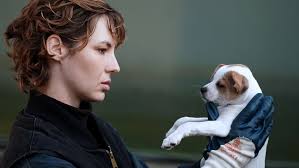 French director Laurent Larivière’s feature-length debut, which has its premiere in Un Certain Regard, tells an important story about dog trafficking in Europe. In a mix of social realism and grim thriller it fails to convince, offering a bland and occasionally odd mix of characters who completely feel completely unauthentic.

Larivière casts a promising French actress, Louise Bourgoin (The Nun) in the lead, as Sandrine, who is returning to her childhood home in a drab Roubaix, near the Belgian border. Here she moves back in with her over-worked mother (Anne Benoit) sister (Nina Meurisse) and brother-in-law (Nathanael Maini), and gradually emerges that she has nowhere else to go. Dowdy and down on here luck, Sandrine goes to work with her uncle Henri, an completely unrecognisable Jean-Hugues Anglade (Queen Margot) who runs a commercial dog kennels but has no interest in the welfare of the animals , and is trafficking dogs from Eastern Europe. Sandrine shows an aptitude for business and soon becomes involving in the trading, which is lucrative. But Henri is also manipulative and turns violent when she offers presents to her family urging her to be discrete about the money for fear of exposure.

Bourgoin’s Sandrine is a colourless character with little charm or sensitivity – the only trait she displays is one of mild disdain for those around her including the accountant (Laurent Capelluto) who exposes himself (bizarrely) at her front door, in a weird rom com twist that just feels awkward . Her general attitude appears to be confident, and this fails to convey why she is appearing to accept this tragic and uncaring scenario. Her family backstory is a tepid affair of mounting tediousness, offering nothing to contrast the hard-edged life world of her Henri’s business activities. The best moments of the drama involve the cute and cuddly dogs that inhabit this harsh underworld with its cruel and uncaring handlers. Larivière’s script, co-written with François Decodts, fails to convince us that Sandrine is appalled, picturing her as slightly irritated yet accepting of the situation. Anglade, a veteran actor of some stature, is extraordinarily underwritten here, coming across as a vacant sociopath with hardly any personality or depth. A dire treatment of what could have been a really affecting and worthwhile story about this serious criminal activity. MT