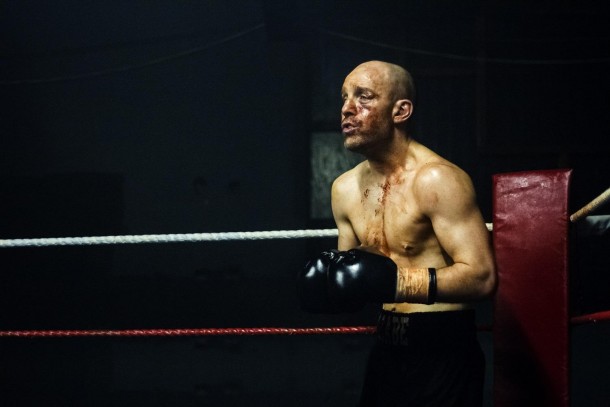 First time director Thomas Q. Napper conjures up a bleak and shadowy portrait of a homeless, alcoholic boxer who has seen better days and retreats to the glory days of his old boxing club in Union Street near Waterloo Station. But the journey into the past confronts him with his lost opportunities and few alternatives for the future.

Jimmy McCabe (Harris, also writer and co-producer), has been evicted from the council flat where he grew up; the whole estate is being raised to the ground. Losing this final connection with his mother, who died a year ago, he runs berserk in a council office, protesting violently, attacking police officers and spending the night in jail. He turns for help to William Carney (Winstone) and Eddie (Smiley), who now run the club where McCabe’s career started so successfully. Carney, who is on his last legs, does not want to hear any hard-luck-stories from Jimmy: “I have heard them all”, but reminds him that alcohol is a taboo in the club, where young boys and teenagers try to channel their isolation and violence into something constructive in the ring. Eddie, who is very close to Carney, has no patience with McCabe, who is sluggish in training and full of self-pity. When McCabe meets the shady promoter Joe Padgett (McShane), he agrees to a non-licensed fight ”up north”, where he will meet a stronger and much younger opponent. Padgett is open about McCabe roles in the fight: for two and a half thousand GBP (plus 500 extra if he unexpectedly wins), Jimmy is the scapegoat. “People love seeing this guy hurting his opponents, and they pay good money for it” is Padgett’s take on the forthcoming fight.

This is a grim and hapless British Noir that calls to mind John Huston’s classic Fat City (1972). Napper holds out little hope for the future but creates a blistering portrait of alienation in a desolate journey through this corner of South-East London, which has not changed much since the ’60s. The timeless settings and authentic characters enhance the quality of JAWBONE, overcoming the limits of the boxing genre, and establishing a noirish scenario, in which the anti-hero is trapped. Like John Huston’s Fat City, the ageing ex-champ is very much the victim of greedy promoters as well as his own inability to come to terms with life without alcohol abuse. But there is more: After Padgett had warned Jimmy about the odds against him in the ring, we see the crowd response: there is an alliance between the sadistic prize-fighter and his supporting audience – as long as he is winning against Jimmy. But this support turns into hatred against McCabe. When he leaves the ring as a winner, he has spoiled their evening, they had came for his blood. Napper taps into the rather shameful audience that watches endless hours of Reality-TV, to see others humiliated. This morose world is hauntingly evoked by DoP Tat Radcliffe (Pride), creating a world of half-shadows, in which the sun never shines. Artificial lights of all kinds, just give Jimmy a moment’s respite, but he can only hide for so long. Worse still, the two protagonists socially inclined to help others, are the dying Carney, and Eddie, who is the same age. One does not want to imagine a world without them – as Jimmy put it to Eddie: “I am not like the two of you, helping others, I can’t even help myself”. JAWBONE is a ballad of doom, atmospherically brilliant, a dark poetic realism for a time of utter disenchantment. AS