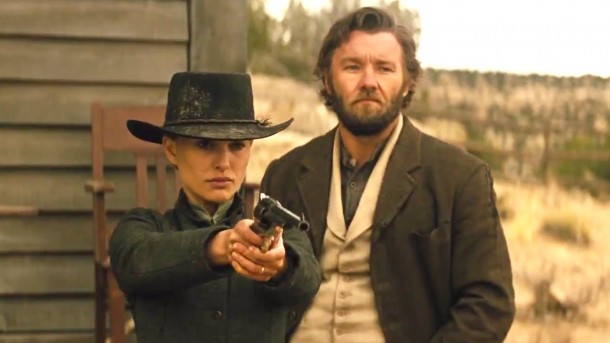 Originally scheduled to be premiered in August 2014(!), this post-Civil War Western lost its original director, Lynne Ramsey, on the first day of shooting, followed by DoP Darius Khondiji, Michael Fassbinder, Jude Law, Bradley Cooper and finally its production company Relativity to insolvency, finally being picked-up by the Weinstein Brothers.

Despite this major setback, a team of various producers, including the film’s star, Natalie Portman and director Gavin O’Connor (Warrior) have delivered a well-crafted, if rather conventional, genre product that is neither sensationalist nor gory in comparison with this year’s offerings The Hateful Eight or Bone Tomahawk.

Jane Hammond (Natalie Portman) living with her husband Bill (Noah Emmerich) on a farm in the New Mexico Territory, rides out to call for the help of her ex-fiance Dan Frost (Egerton), after her husband returns from a gun fight much the worse for wear courtesy of the Bishop gang. Frost is none too keen to help, since Jane was supposed to wait for him, after he returned from the Civil War. But he does not know that Jane and their baby Mary, had been taken prisoner by the gang, led by John Bishop (McEwan). Jane was sold into prostitution and Mary killed, before Bill liberated her. Reluctantly Frost sets out to make the Hammond house into a fortress, using Molotov Cocktail like glasses filled with kerosene, hidden underground in front of the house. While Bill is killed, Jane is hell bent on revenge but the captured Bishop has a surprise, which he hopes will save his life.

Whilst the heroine in this case is a woman, all the rules of the macho Western apply. The same goes for the narrative, with flash-backs of Jane’s life supplementing the audience’s understanding of the protagonists’ main motives. It is no accident that the Western as a genre has come to the end of its dusty life – no matter how many insufficient attempts at resuscitation have been made – simply because it is set in a bygone era with limited plot lines available, and the happy-ending is even more guaranteed than in any other Hollywood genre. The ensemble cast is impressive and Mandy Walker’s images are resplendent with fight scenes full of bravura; the overall impression is more of duty: JANE GOT A GUN is a comfortable ride in the familiar territory of the traditional Western. AS