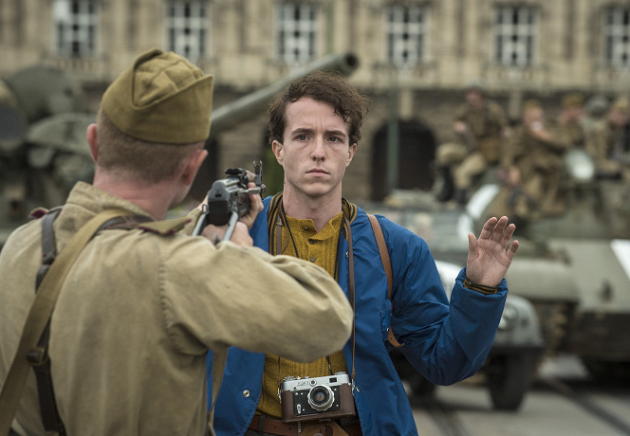 Robert Sedlacek (Rule of Lies) transforms Eva Kanturkova’s concise script into a complex psychological study of the Czech hero and political activist Jan Palach who killed himself in January 1969 in protest of the Soviet invasion of his country in August of the previous year. Palach’s death was a particularly horrific one but director and writer steer away from hagiography, sensationalism or dry political drama to tell the human story exploring the complex personality and motives of the 20-year old student of history and philosophy.

1968 saw students all over the world on the barricades: in Paris, Berlin, Berkeley and Mexico City, where hundreds were shot just before the start of the Olympic Games. In Prague, students were the backbone of the resistance movement against the Soviet tanks, which rolled into Prague ending the Prague Spring of Prime Minister Dubcek, and dragging the country back into soulless, authoritarian Stalinism. The Prague students shared with their counterparts abroad, a love of spontaneous action and a lack of long-term strategy. They also fatally underestimated the powers they opposed. But theirs was not only an uprising against the state, but also against the values of their parent generation. In the case of Jan Palach, the target was his mother Libuse (Bydzovska), who lived in the small town of Vsetaty. She was hardly a staunch supporter of the communist regime, but having seen her husband, an entrepreneur, being punished by the authorities, she towed the line in order to make her son’s life easier. Since Jan’s father was classified as a bourgeois, only his mother’s ‘class-conscious’ behaviour made it possible for him to study at the Charles University of Prague. Whilst Jan was extremely obedient for his age – when he visited with his girl friend Helenka (Baresova), he slept in a separate bed, before Helenka asked him to join her – but deep down he blamed Libuse for her appeasement of the regime; and even the early death of his father, who lost his business and his drive. This did not prevent him from downing a puppy born to his beloved childhood dog Lassie. They could only find homes for the rest of the litter, so he obeyed his mother’s orders.

Palach, like many of his believers, was more interested in the concept of equality than in a personal relationship with others. Whilst he supported a Russian comrade in a ‘Youth Camp’ in Kazakhstan, who rebelled against the sub-standard food, he felt much safer in groups, uncomfortable with one-to-one relationships. When he went to France to work for a few weeks picking grapes, he cut himself off from his co-workers. Jan always kept a slight distance from Helenka, who suffered from polio; he was more her helper than her lover. And when tempted, he fell easily for the advances of her attractive room mate Eva (Kanatova). Palach neither drunk nor smoked, his attitude was always to adopt the passive-aggressiveness of a martyr. Sedlacek plays this out in a scene where Palach has just been beaten up severely by a security officer in civilian clothes, and is examined by a medical student: Jan seems to revel in his injuries. In his farewell letter he suggests that there are many like him, willing to die by self-immolation, a boast which is untrue. It is much more reasonable to assume that Palach was inspired by Thich Quang Due, the first Buddhist monk who self-immolated in Saigon, and the Polish activist Ryszard Siwiee, who did the same as a protest against the Soviet Invasion of Czechoslovakia in September 1968. Jan Palach left behind his mother, girl-friends and his studies. He also left a stain on his relatives, friends and fellow students: they felt guilty for not having prevented his suicide, but decided to “wait” for a change, something Jan was not able to countenance. Finally, every suicide is half a murder – in this case a very violent one: proof of the enormous latent anger the young man was concealing behind his unexceptional facade. He was not only the victim of an authoritarian regime, but also of his own, unsolved contradictions. We feel his humanity poignantly, but never is this over-stated in Sedlacek’s treatment.

Victor Zavadi is convincing in the title role, and so is Bydzovska as his mother Libuse. They are likeable characters and decent people. Baresova’s Helenka is very much aware that Jan’s feels pity for her, rather than love or even lust. DoP Jan Suster evokes a bland but classically-styled Prague, the university halls seem uninhabited by the ghost from the past. Vsetaty looks like a bucolic pre-war village, the food supply behind the overriding concern of the day. Overall, this traditionally-styled feature has very much the feel of a Chekhov drama: an intransigent hero, full of great words, but finding no real human contact, until there is only one way out. AS