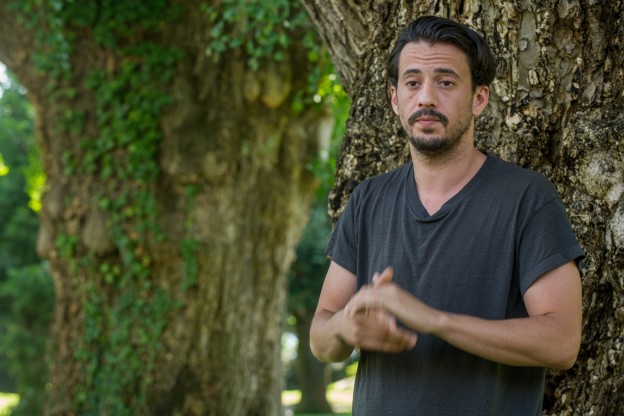 Having produced the likes of MARTHA MARCY MAY MARLENE (2011) and SIMON KILLER (2012), Josh Mond makes his directorial feature debut with JAMES WHITE, whose bland, personifying title suggests a continuation of the previous character studies’ low-key naturalism. Taking its name from its ‘just like you or me’ protagonist (Christopher Abbott), JAMES WHITE is a moving, nuanced portrait of a twenty-something Manhattanite trying to find his place in a world that appears to be dealing him several cruel hands at once. At the beginning of the film we learn James’ father has recently died; at the weeklong Shiva, to which he shows up wearing a casual, black hoodie, James meets his father’s new wife, of whom he only heard first mention weeks previously.

We sense from the awkward welcome he extends to the stepmother he never knew that James is loyal to his own mother, Gail (Cynthia Nixon), whose pale complexion and wig-hidden bob hints towards a recent bout of chemotherapy. Asking Gail to fund a vacation so that he can have some thinking space, jobless James retreats from immediate responsibilities to a coastal resort with his pal Nick (Scott Mescudi), where he meets Jayne (Makenzie Leigh), a high school student also, by coincidence, from New York City. When his vacation is cut short by a phone call from Gail revealing she has been re-diagnosed with cancer, James continues his relationship with Jayne, but the pressures of having to care for his mother weigh increasingly heavy.

Mond handles the tonal shifts of this extremely mature story with deft precision. Though sober, the film is never austere: it neither banishes comedy nor milks the tragedy that caring for a terminally ill parent entails. Though Mátyás Erdély’s cinematography—previously showcased in Sean Dirkin’s TV series SOUTHCLIFFE, in addition to this year’s SON OF SAUL—often privileges Abbott/James with shallow-focus compositions, his notably widescreen framing evokes a wider social fabric to which the protagonist is only intermittently aware.

The strength of Mond’s drama rests upon two fundamental realisations. Firstly, that there is much dramatic potential in a premise built around an otherwise antiheroic male whose everyday experiences compel him one way (hedonism, listlessness, laziness) while the universal banality of a parent being diagnosed with cancer pulls him another. Why? Because starting from an ordinary character forces an astute writer-director to ask questions that an exceptional circumstance doesn’t (e.g., if James were, say, a remarkably promising artist diagnosed with premature sight loss, we can only imagine the dramatic liberties taken). Secondly, that it’s in the way you tell a story that determines its believability.

Here, Mond includes otherwise superfluous details that enliven rather than distract from his fictional universe. In terms of character, consider the choice to have Scott Mescudi, better known under his music-making moniker King Cudi, play Nick as a homosexual. While deleted scenes elaborated on this more, the omissions de-sensationalise the supporting character’s sexuality so as to re-humanise it. Add to this Mescudi is black, and it’s refreshing to watch a film that resists the more obvious issues-based agenda. It helps that Mescudi’s performance is excellent. For evidence that he is an actor of outstanding subtlety—encompassing both body and facial control—look no further than three separate and very different moments: when he trudges toward camera in his work uniform and declares with deadpan hyperbole that he wants to kill himself; immediately after, when he browses a store on an acid trip; and when he confronts his best pal in a hotel room, physically stifling James’ pent-up aggressions.

Mond’s brand of naturalism is also helped immeasurably by Abbott, promoted to leading man here after much smaller roles in MARTHA MARCY and A MOST VIOLENT YEAR (2014). The Connecticut-raised actor forms a plausible chemistry with each of his fellow cast members, not least of all Nixon, with whom he shares many a poignant moment. Chief among these is that heart-achingly prolonged take in which James calms his mother during a middle-of-the-night bathroom visit by getting her to imagine she’s somewhere else, somewhere exotic, away from all the shit unfolding at home. MICHAEL PATTISON