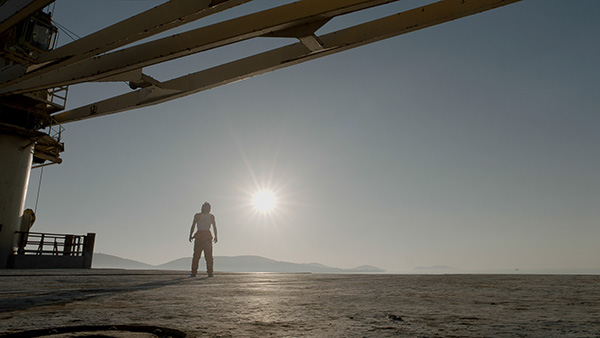 Tolga Karacelik (Toll Booth) seems to tell a straight story about a mutiny on a vessel stranded off the Egyptian coast, when suddenly and unexpectedly he changes gear and genre, leaving the audience as stranded as the crew.

Captain Beybaba (Alkas), aloof and usually locked in his room, has little to choose from when he hires two new crew members: Cenk (Saribacak) and Alper (Yildirim) are both dope heads, but they will have to do, since the rest of the crew has not been paid for months. But the situation gets worse when Beybaba learns that the owner has been declared bankrupt, which means that if they pull into port, the ship and cargo would be impounded, and no wages paid. Beybaba, ankering a few hundred metres away from the shore, decides to stay on the ship with five men, the minimum number of crew, and wait for the situation to be resolved so that he and the men get their wages.

Apart from the two newcomers (who are running away from both the gang members and the police) the crew consists of Ismail (Cermik), the captain’s deputy, who tries to fulfil all orders with relish; the young cook Nadir (Karsak) and a nameless Kurdish hulk who says little (Ozturk). After over a month, and no prospect of wages, Cenk, a weasel of a man, finds it easy to stir up a revolt. Whilst Nadir is caught in the middle, Ismail has great difficulties keeping Cenk and Alper under control, ably assisted by the Kurd, whose size alone is threat enough for Cenk. But then, the big man disappears without a trace, even though some crew members admit to seeing his shadow. So it’s time for Cenk, who like Alper, is suffering from withdrawal symptoms, to force open the medicine cabinet. But somehow a curse has befallen the crew.

DOP Gokhan Tiryaki (who photographed Nuri Bilge Ceylan’s One Upon a Time in Anatolia), choses the usual Turkish  widescreen mode to underline the eeriness of the situation which echoes The Day of the Triffids. Karacelik leaves it open as to whether the crew are hallucinating for rest of the drama, but explanations are irrelevant: what happens is really horrific, particularly after the stark realism if the first 80 minutes. A haunting original soundtrack by Ahmet Kenan Bilgic and a very strong cast helps to make IVY into one of the few films were the fear factor is really tangible – made all the more horrific because of its suddenness. AS