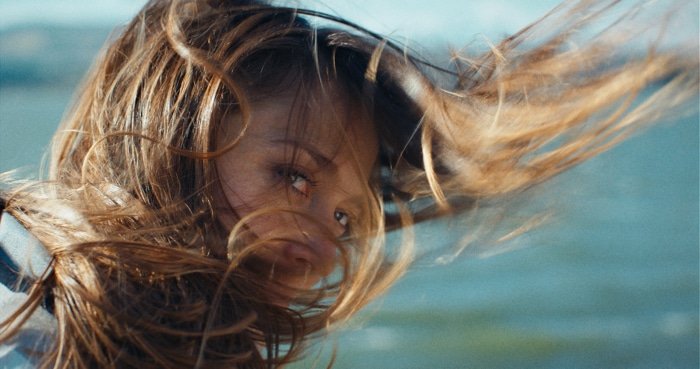 Director/co-writer Ivana Mkadenovic (Soldiers: Story from Ferentari) describes her latest, a fictional autobiography, or docu-fiction hybrid is very much in the vein of this year’s IDFA winner Radiograph of a Family although far more satirical in nature. The past and the present collide in Kladovo, Serbia, near the border to Romania, where Ivana also ‘stars’ as a histrionic millennial jilted by her Romanian lover and suffering the after-affects of PTSD. Her family, friends and former lovers play the other roles.

We first meet Ivana on a train going back home to Serbia for the summer, where we get to experience just how terrible she really is. Freed from her work commitments, she accepts the mayor’s invitation to become the face of a local music festival, and finds herself the latest citizen to be honoured with an award acknowledging the bond of friendship between Serbia and Romania. It just so happens that the Trajan (Friendship) Bridge over the Danube connecting Serbia and Romania, and where Tito and Ceausescu once famously met, is also in Kladovo, on the Serbian side, adding all sorts of bilateral connotations to the narrative, along with the generational conflicts.

Far from triumphant, Ivana’s return puts the cat amongst the pigeons on all front , escalated by her fragile state of mind. To make matters even worse (or somehow better, as it turns out), Ivana’s relationship with a much younger guy is soon the talk of the town (the general consensus being that she should settle down and start a family), but this gossip soon confers a kind of celebrity status on the petulant woman, her erratic behaviour becoming par for the course. Her behaviour certainly challenges social stereotypes in the traditional community. And the arrival of Ivana’s friend (portrayed by Romanian-Canadian singer-songwriter Anca Pop – to whose memory the film is dedicated) is a another game-changer, further enhancing her bad-girl status in the village, and there is much consternation among the old-fashioned local womenfolk when an offer to have their private parts form the basis of a local sculpture is not well-received, to say the least.

Eventually Ivana gets a lift with Anca and Andrei back to Bucharest, stopping on the way to listen to some poets reading on the Friendship bridge. Another dimension to this (un)happy merry-go-round comes in the shape of a story from the Second World War when over a thousand Jews came to Kladovo where they were to be escorted by boat to the safety of Palestine. But the ship never came, and the Jews lost their lives during the ensuing Nazi occupation of the town. MT