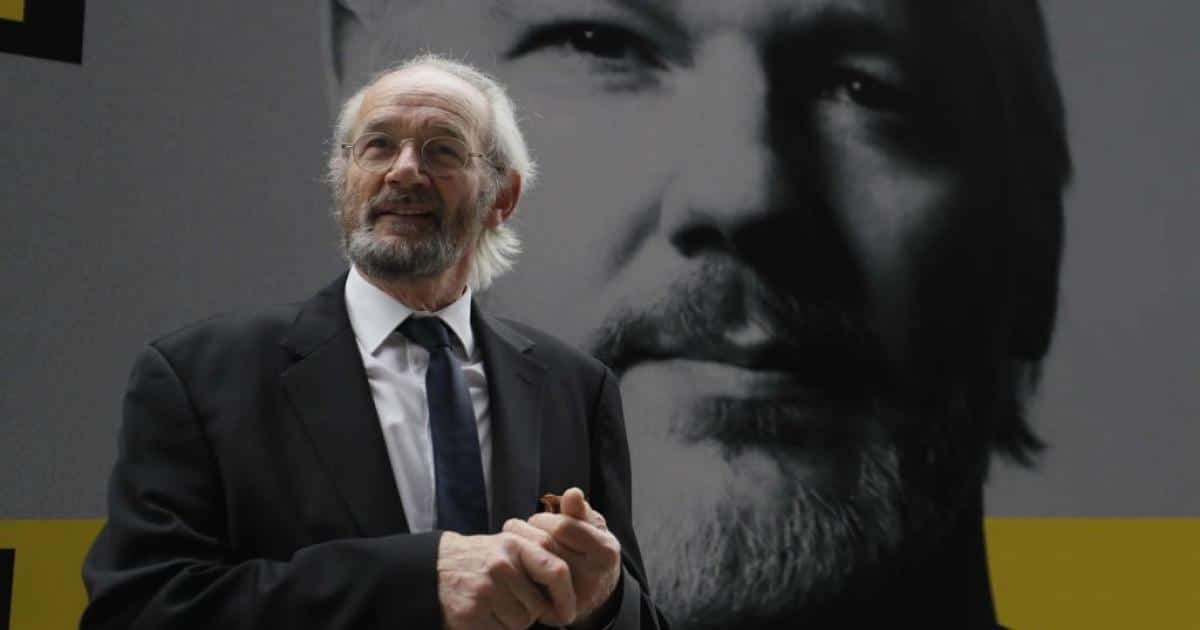 The contraversial WikiLeaks founder Julian Assange (*1971) is the subject of this new documentary that takes the first lines of the titular 1911 poem by Greek writer Constantine Cavafy as its motto: As you set out for Ithaca /hope that your journey is a long one/full of adventure, full of discovery”.

Assange could not have asked for more: his discoveries are the stuff of nightmares, and the revenge of the governments he exposed has landed him in Britain’s High Security prison Belmarsh where he has languished for the last three years, actually managing to marry while in captivity: quite a feat for most people, particularly those accused of rape. Anyone who saw Laura Poitras’ hagiographic biopic Risk (2016/7) will have made up their minds about Assange’s persuasive powers where women are concerned, but Lawrence casts no judgement here, keeping his distance. An extradition order from the USA is pending, with British home secretary Priti Patel only too willing to oblige.

We meet Assange’s wife, the lawyer Stella Moris, at the unveiling of a statue of her husband in Geneva in November 2021. “I am here to remind you that Julian isn’t a name, he isn’t a symbol, he is a man and he is suffering”.

The couple have two young children, both conceived at the Ecuadorian Embassy in London, where Assange stayed between 2012 and 2019. There is CCTV footage from the embassy, showing Assange and Moris, the former skate-boarding in his room. A guard warned Moris that the footage was to be sent to the US secret service every fortnight – Moris stopped visiting Assange. She also learned there were plans to poison her husband. The UN Special Rapporteur for Torture, Nils Melzer said “Torture is a tool used as a warning to others. It’s most effective when inflicted in public. In Julian’s case it’s about intimidating everyone else”. In this particular case it was Chelsea Manning, ex-US officer, who blew the whistle on Afghan war crimes by the US Army, and went to prison, to avoid talking about Assange’s part in the operation after she found out that Assange was depressed, and suffered a ‘mini’ stroke in Belmarsh Prison.

The time at the embassy coincides more or less with the Swedish Justice system accusing Assange of sexual assault, a charge bought forward by two Swedish women in 2010. In 2019 the case was dismissed, due to the long intervening period since the original accusation.

Besides Moris, Assange’s main defender is his father John Shipton (76), who travels the world in search of a positive solution to the case, neglecting his own five-year old daughter in Australia. John stepped out of Julian’s live when he letter was three, but re-entered when John was in his early twenties. John is tired, so much time is lost for him and his daughter Severine. He likens Lawrence to “Dostoevsky’s Grand Inquisitor”. “He keeps burrowing away”.

On January 10th 2022, the UK High Court ruled Assange could be extradited to the USA, overturning a Lower Court ruling from 2021. On March 3rd of this year, the High Court refused Assange permission to appeal. On June 17th 2022 Priti Patel, UK Home Secretary, approved the extradition order. Two weeks later Assange and his team appealed against the extradition order. The war in the Ukraine has led to strong statements in the western media. It is perhaps helpful to remember that one of the WikiLeaks posted on 12.7.2007 concerned the killing of journalist Namir Noor-Eidsen and Saeed Chmagh, who were shot dead from the air by a US helicopter.

A strong score by Brian Eno helps to round off this passionate plea for a man who, according to Melzer, “never wanted to be in the spotlight”. AS