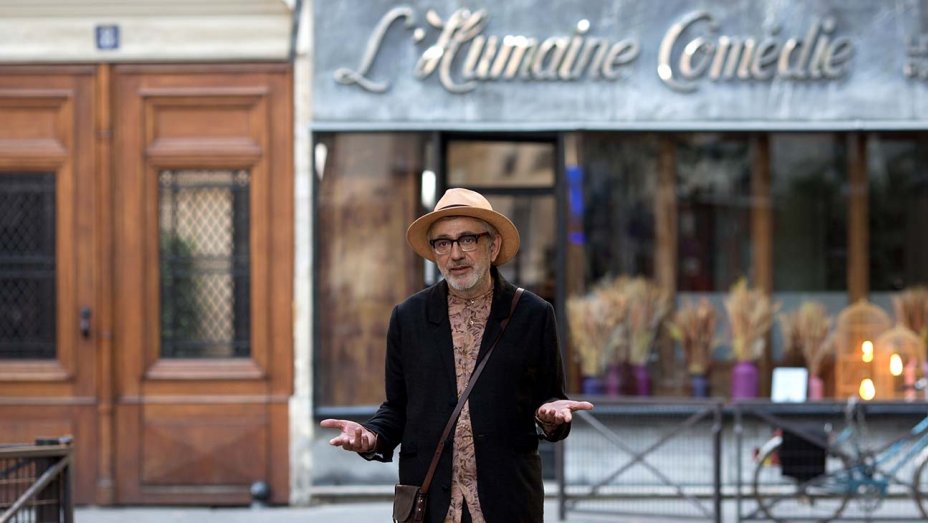 Best known for Chronicle of a Disappearance (2009), and Divine Intervention (2002) actor and filmmaker Elia Suleiman uses a blend of burlesque and sobriety in this droll observational comedy set in his native Nazareth, Paris and New York.

There is no narrative to speak of here, just a series of amusing vignettes plucked from everyday life epitomising the sheer ridiculousness of the ‘new normal’ in our increasingly paranoid world.

The common threads that run through this calming rather meditative feature focus on police harassment and surveillance, and weird behaviour of the general public. It’s a less stylised version of Roy Anderson’s cinema style. As the serene star of the show Suleiman conveys all this with a lightness of touch and elegant framing that brings out the life’s banality in all its glory.

The opening scene in Nazareth follows a solemn Easter procession of Orthodox faithful towards a some sacred wooden doors that are supposed to open at the priest’s command. Sadly, the people on the receiving end decide not to play ball, and we watch the priest give them merry hell from the other entrance, removing his mitre to facilitate his angry tirade. .

Arriving in Paris, Elia gawps at the beautiful girls from the safety of a pavement cafe. Having coffee the next day, police arrive and measure the place up, to make sure it conforms to government guidelines. Thankfully it does, and they depart poker-faced. On the way back to his apartment, a strange muscle-man stares at him disconcertingly in the metro, before performing a regular routine with a beer can. Back in his apartment, Elia looks out of the window to see three police officers inspecting a parked car, their choreographed movements on ridiculous electric scooters, are a recurring comedy motif throughout.

The next day, Elia runs into two Japanese tourists who ask if he’s ‘Brigitte”. Although this seems an innocent question on their part, the irony of the situation is clearly lost in translation, and they interpret his walking quietly away with bewilderment.

One of the best scenes involves a meeting with a film producer that is both polite, euphemistic and ironic – given the situation. Elia then runs into his friend Gael Garcia Bernal, played by the Mexican star himself. But his attempts to introduce Elia to a female producer ends abruptly: “It’s a comedy about peace in the Middle East,” says Bernal. “That’s already funny,” she replies without really thinking. In New York the mood turns more hostile. Everyone seems to be carrying guns, even the women. His Palestinian identity is greeted with either genuine amusement, or hostile suspicion.

This cinematic gem works it lowkey magic, Sofian El Fani’s widescreen camera allowing us to take in the big picture, on a global scale in pastel long takes. Uncluttered by trivia, the message is even more meaningful, Suleiman’s simple yet resonant musings are a joy to behold. MT