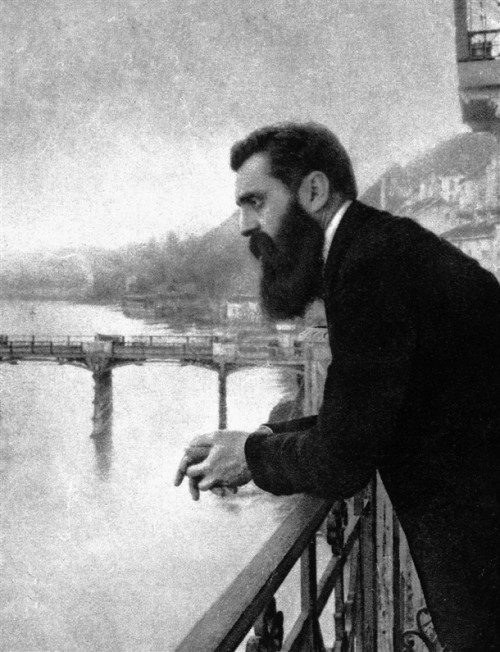 Narrated by Sir Ben Kingsley, this documentary about the “father” of the Jewish state, Theodor Herzl (1860-1904) sheds some light on the intellectual fight for a Jewish homeland and comes up with some surprises regarding Herzl’s personality and ideas, his friends and enemies in the Jewish movement. To start with – Herzl, born in Budapest, his family later moved to Vienna – was a typical assimilated Jewish intellectual, who cared mostly for his journalistic work and his plays – he hardly went to a synagogue before the late 1880s. Herzl had studied law, but had success as a playwright and journalist for the “Neue Freie Presse” in Vienna. All changed when he was send as a foreign correspondent for the newspaper to Paris, where the Dreyfuss scandal erupted in 1895.  He sensed that the growing anti-Semitism in Europe would end in a catastrophe for the Jews – a prophecy unfortunately fulfilled. He appealed to Baron von Rothschild to support the foundation of a Jewish state, whose language should be German (because of its closeness to Jiddish) and its constitution would be strictly secular. Rothchild, like all moneyed Jews, ignored or even fought Herzl for the rest of his life. In 1896 Herzl published ‘Der Judenstaat’ (The Jewish state), calling assimilation ‘not very praiseworthy’ and seeing the future state in Palestine as “magnified by our greatness”. But he still had to appease the religious establishment “Judaism has nothing to fear from the Jewish state” – a quote which seems incredulous in the context of the modern Israel.

Herzl went on to meet Europe’s rulers, like Kaiser Wilhelm II in Palestine, the ministers of the Czar in St. Petersburg and members of the Foreign Office in London, to ask for help in setting up a Jewish State. The British came up with a solution: they offered Uganda, an idea, which – against Herzl’s will – was more or less rejected by the 6th Zionist Conference in 1903. In his last literal statement “Altneuland” (Oldnewland) he wrote in 1902 “that Jews and Arabs would help each other in the new country” and hoped for a “third way between capitalism and socialism”.

Whilst Herzl’s fear of the Shoah became reality, and his daughter Margarethe (1893-1943) was murdered in Theresienstadt, his dreams about a peaceful, cooperative Israel stay unfilled: the contemporary version of Sparta in the desert is far removed from anything Herzl and the founding fathers had in mind.

A very in-depth research with documentary footage and stills, the film portrays Herzl as visionary, who had to fight Jews as much as Gentiles, and who died much too early exhausted and disconsolate not to have seen the fulfilment of his dream. As a dreamer, he did not contemplate that reality would make Israel into a nation state like all others: hungry for land belonging to others.  AS

SCREENING AT THE UK JEWISH FILM FESTIVAL ON WEDNESDAY 13 NOVEMBER 18.30 AT THE TRICYCLE LONDON.  tickets here