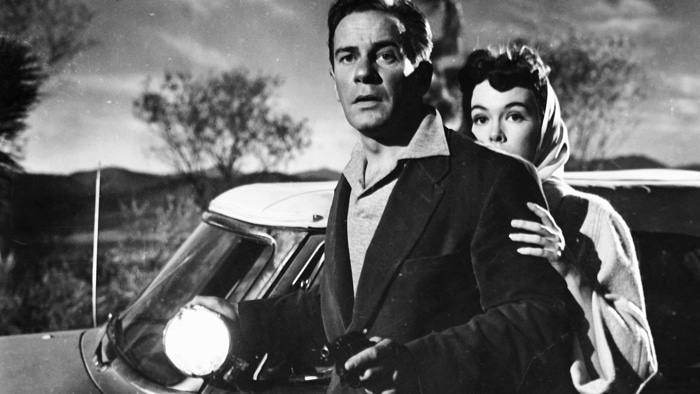 Director John Arnold (1916-1992) was the mastermind behind seven Sci-Fi classics between 1953 and 1958. It came from outer Space was the first, shot in 3-D and based on the short story ‘The Meteor’ by Rad Bradbury and written for the screen by Harry Essex.

Seen as an anti-McCarthy feature at a time when Aliens and ‘Reds’ were both out to destroy the idyll of small town America, Arnold uses small Californian towns like Victorville and the Mojave desert as background to create an exotically eerie backdrop .

Astronomer and author John Putnam (Carlson) has moved to the desert, finding his intellectual viewpoint at odds with the small-time folks back home. He is in love with school teacher Ellen Fields (Rush) who plays truant when the two discover a meteor hitting Earth. It later transpires that an alien spaceship has made some sort of an emergency landing but Sheriff Matt Warren (Drake) is the first to denounce John’s theories after visiting the crash site, he also has the hots for Ellen.

Strange things happen all over town, as citizens are cloned by the Aliens. Among them are Frank Dayton (Sawyer) and George (Johnson) two electricians whose spouses are telling Warren their men folk changed personality before simply disappearing, taking their clothes with them. John, helped by Ellen, finds out that the Aliens are repairing their spaceship, using the tools and equipment of the local engineers and electricians. Then Ellen gets taken over by the strangers, she appears to John in an evening gown and leads him to a mine, where she is taken hostage.

John comes to an arrangement with the leader of the spaceship who appears as a glittering droopy-eyed monster. John pretends to blow up the mine, whilst Warren and his posse (or lynch mob), are closing in on the entrance. The Aliens repair their spacecraft and leave Earth.

DoP Clifford Stine creates some startling black-and-white images, often veiled by an ethereal mist. It Came from Outer Space shows Arnold (who was assistant to Robert J. Flaherty) as a chronicler of the The Eisenhower era, where anti-intellectualism and the McCarthy Witch Hunt was the dominating factor. Arnold’s other classics sided with outsiders, among them Creature from the Black Lagoon (famously restyled by Guillermo del Toro in 2017), Tarantula and The Space Children. He was also known for his Westerns, and one of his last cinema features, The Mouse that Roared (1959) which made Peter Sellers an international star.

A true creative, Jack Arnold later switched to directing TV fare, his seminal ideas providing the basis for some of today’s most popular big and small screen outings. There is hardly a series he did not have a hand from Wonder Woman to Dr. Kildare; The Brady Bunch, Ellery Queen and Perry Mason amongst the very best. AS