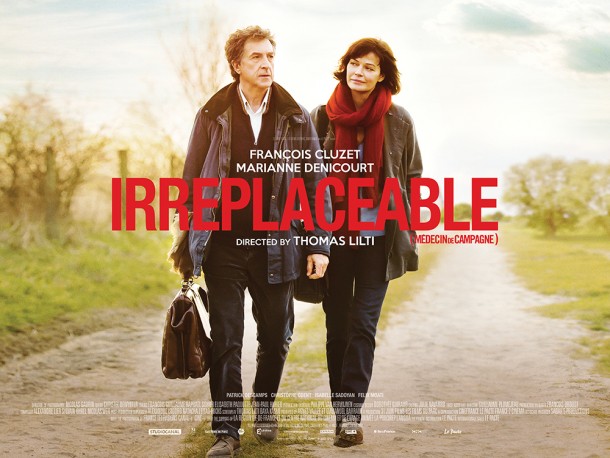 Doctor turned screenwriter Thomas Lilti has finally found his groove with a couple of well-made and watchable medical dramas using classic French stars. Hippocrates: Diary of a French Doctor was the first, with Reda Kateb as a hospital clinician working in Paris. The latest, IRREPLACEABLE, is set in the farmlands of Ile de France where Intouchables star François Cluzet is a doctor diagnosed with a life-changing condition that forces him to recruit a colleague in his small country practice.

Jean-Pierre Werner (Cluzet) is rather a tetchy single father in his fifties who prides himself in his personal approach to his patients, spending his days on home visits in the rural community, often beyond the call of duty. But when he is told to cut down on his workload due to a tumour, he grudgingly interviews Dr Nathalie Delezia (Marianne Denincourt/Hippocrates) who has come late to the professional, in her  forties, but has loads of experience as a nurse in casualty. After giving her rather a hard time, the two start work together, Nathalie feeling her way forward cautiously with a caseload of tricky patients and a crusty colleague into the bargain.

Lilti cleverly brings reality to the film – not just in his medical knowledge – but in his maturity of experience in dealing with patients and the profession as a whole. And this makes such a difference to a film which could so easily have been just another implausible medical procedural. Combining quality acting talent with a pithy script, he brings integrity to the film, making it enjoyable but also entirely natural. Theres’s a feisty tension between Werner and Delezia that brings a welcome relief to the more serious medical narrative dealing with real issues facing the profession in France.

This is a restrained and nuanced character drama which makes great used of its lovely rural setting in the Val-d’Oise and the towns of Omerville and Magny as Lilti creates tension and cleverly balances the three narrative strands: the relationship between the two doctors; Werner’s uncertain medical future and the social politics of the patients themselves, and their life and death issues. Thomas Lilti is certainly a talent worth looking out for where quality French drama in concerned. MT