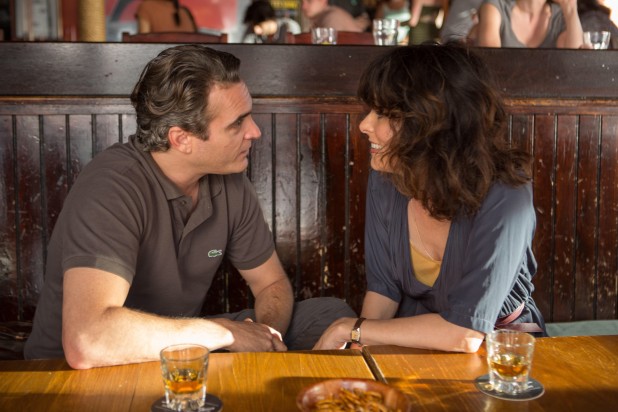 Woody Allen’s 45th film has him once again contemplating the perfect crime as he did in Match Point, Cassandra’s Dream and Crimes and Misdemeanours. With IRRATIONAL MAN (which takes its title from a 1958 work by philosopher, William Christopher Barrett, which aimed to explain existentialism to the uninitiated) his central character kills not for love or money but apparently as a intellectual exercise and out of a sense of social justice on behalf of a woman he takes pity on.

This rural drama takes place in the lush locale of the fictional ‘Braylin College’, at Salve Regina University, Newport Rhode Island, where Joaquin Phoenix stars a the rather louche and laconic philosophy professor, Abe Lucas (with beer belly). An immediate hit with all the women; he is single, vulnerable and a serial monogamist by his own admission, although too wrapped up in his own existential angst to be emotionally available ‘at the moment’. A red rag to a bull, and he knows it.

As he moves around the Campus, looking vaguely distrait, he also demonstrates courage and reckless abandon by playing Russian roulette with a loaded gun at a cocktail party: female students and lecturers are smitten. “Emotionally, I had arrived at Zabriskie Point” Abe tells us in voiceover, but this seems only to encourage his lustful entourage more, particularly the unhappily-married Prof. Rita Richards (Parker Posey in ‘cougar’ mode) who throws herself in his direction, offering to “unblock” him. And before you can say ‘Kierkegaard’ – they are in bed and he’s apologising (but not that much) for his lazy performance. Next up is fresh, young “ethical strategies” student, Jill Pollard (Emma Stone). But Abe is keen to remain detached because his depressive state has temporarily rendered him ‘asexual’. He is also well-aware of the intimate confines of this Red Brick community and Pollard has a regular boyfriend, who becomes suspicious of her increasing interest in Abe’s ‘mind’. But she plugs on attracted by his previous activist and aid involvement in Darfur. This sense of social justice is piqued again when Abe and Jill overhear a conversation in a local restaurant. A desperate woman is bemoaning the bitter details of her divorce and the judge who’s siding with her ex-husband – fancifully hoping that the judge will die before the final trial.

This pathetic wish seems to capture Abe’s imagination, galvanising him into action as he feels the stirrings of an ideal murder shaking him out of his mental torpor and even ‘unblocking’ him sexually. Suddenly, he is alive again, with the strategy for this crime coming together in his head. The premise is so fanciful and yet so all-consuming, that somehow this leap of faith seems entirely plausible.

Allen’s direction and editing are really masterful in IRRATIONAL MAN and his cast performances slick and enjoyable. particularly that of Joaquin Phoenix, who exudes both charm and sexual chemistry as the feckless yet endearing Abe. Emma Stone and Parker Posey compliment each other as his amorous partners, each evoking their representative age groups, of hope versus experience.

Cinematographer Darius Khondji does great justice to the environs of Connecticut making it a verdant, appealing setting in contrast to the usual urban sprall and the score of The Ramsey Lewis Trio evokes the mood of mounting tension with original version of “The In-Crowd”. MT