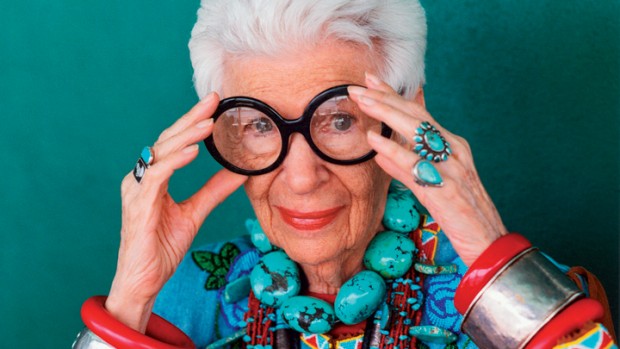 Legendary documentary filmmaker Albert Maysles has created an imaginative portrait of the interior- and fashion designer Iris Apfel who despite her advanced years, still seems much younger at heart than her students. Maysles, who directed such classics as Gimme Shelter (1970), Grey Gardens (1975) – both co-directed by his brother David – and When We Were Kings (1996) lets the camera do the talking, catching Apfel often in un-guarded moments.

Iris Apfel comes across as a very shrewd business-woman and playful child who has made her hobby – arranging clothes and accessories she finds abroad or in bargain stores – into her very successful profession. With her huge glasses, and glittering rings, necklaces and armbands, she is permanently re-inventing herself. She is in love with creating looks, but she is very much aware of the shortcomings of her trade in particular and society as a whole. To counteract the craftsmanship disappearing, Apfel and her husband Carl (who celebrated his hundredth birthday during the shooting), founded the “Old World Weavers” company, so that the skills of weaving in 18th and 19th century would not be lost. Carl also shot 16mm films of their twice yearly trips around the world, were they would collect their materials in bazars and flea markets.

Today’s students can only marvel at their visiting professor but it is clear that it is Apfel, and not the students, who is the revolutionary here. Because Iris has always made a clear difference between her identity and her presentations: “It is more important to be happy, than to be well-dressed”. During the years, she has helped many White House residents to re-vamp their living quarters, sometimes, as with Jackie Kennedy, there were inevitably some disagreements, but Iris is not starstruck by any celebrity: “We should not talk too much about them”, making clear that she is not impressed by either status or money.

In spite of this, she has an eye for the latter (“I need some Shekels”), and when she empties three huge storage places, where the treasure from her many journeys is stored, the contents would fill a very huge department store. But her work ethic is un-diminished. Having grown up during the depression in middle-class Queens, she is still a workaholic: “If you are lucky enough to do something you love, everything else follows”. But she has never  lost her wits or sense of reality, calling on the efforts of the fashion-scholar Harold Koda to “make me into an octogenarian starlet”.

Unlike in Grey Gardens, when the fashion designer Edie Bouvier Beale was the subject of Albert and David Maysles portrait, the interaction between the director and Apfel are very close, both sharing not only the same age (which Apfel makes very light of, even a hip replacement not slowing her down much), they also have same taste, preferring childlike imagination to ordinary prettiness. IRIS is a truly original creation, and a fitting farewell tribute to one of the great documentary filmmakers of our time. AS