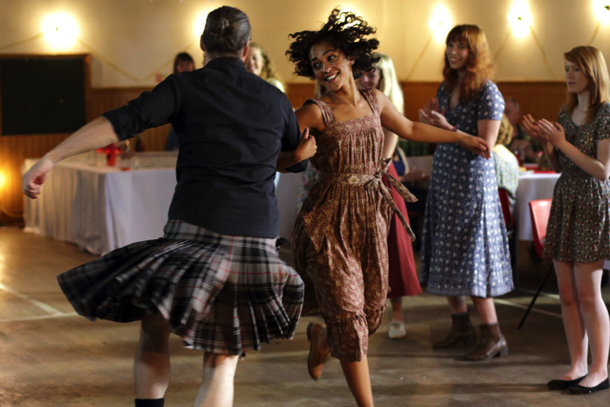 It may be a truism, but the saying that the second film is always more difficult is again proved right, this time in the case of Scott Graham (Shell), whose IONA, in many ways similar to Shell, is disappointing.

The Aberdeen writer director has set his narrative on a small Scottish island, where Iona (Negga), arrives with her son Bull (Gallagher), to take shelter in the place where she grew up. Bull has killed his violent policeman father raping his mother. The young man is guilt ridden and the religious community on the island gives him some comfort. But this all changes when he falls in love with Sarah (Groundsell), a teenager who is dumb and unable to walk due to an accident caused by the negligence of her father Matthew (Brooke). Sarah’s mother Elizabeth (Duncan), Iona’s half sister, has a very ambivalent relationship with Iona, suspecting her (rightly) of having a carnal relationship with her father Daniel (Henshall). After Bull sleeps with Sarah – enabling her to stand again – his trauma is re-ignited and he runs towards the cliffs, where two men follow him.

IONA is all rather enigmatic, and even when we discover some of the characters’ motivations and relationships, this drama remains rather unsatisfying with an overriding tone of guilt and remorse but few explanations. As with Shell, an extended short, Scott Graham commits the same error with IONA: the narrative feels 0ver-stretched and shrouded in an atmosphere of doom and gloom, from which there is no conclusion. The rationale behind the behaviour of the whole cast is always in doubt, particularly since everyone appears to hiding something. IONA also suffers a structural problem: too often there is a brooding silence; looks are exchanged and the whole tempo slows down, only to explode in the final minutes. DOP Yoliswa von Dallwitz evokes the limpid delicacy of the island landscape achieving the same feel as in Shell – with washed out hues for the scenes in the small, old-fashioned cottages. Dialogue is threadbare thrusting the focus onto the acting with some moving performances from Douglas Henshall and Ruth Negga doing their best to maintain our interest in this rather slim but touching affair. AS