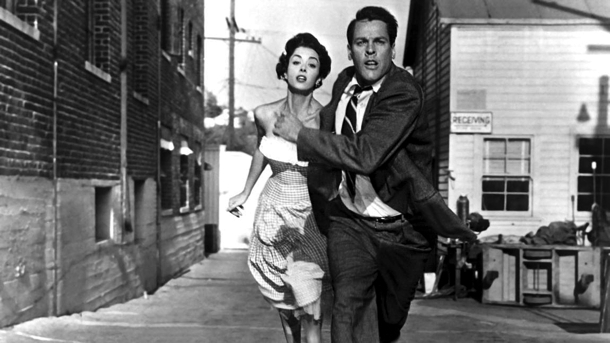 Invasion of the Body Snatchers (1956) blu-ray

Don Siegel’s sci-fi noir, based on Jack Finney’s novel, is one of the best screen metaphors for collective paranoia in fifties America, and possibly the most glamorous and well-dressed. Shot in pristine black and white, it showcases the creeping undercurrents of fear that permeated the anti-McCarthy era from a melodramatic opening sequence right through to a stunning denouement. Further adaptations followed on, from Philip Kaufman (1978), Abel Ferrara (1993) and Hirschbiegel & McTeigue (2007) but none match the edgy exhilaration of Siegel’s elegant outing.

Dr Miles Bennell investigates alien duplicates that surface to replace their real-life owners in the starchy, middle-class town of Santa Mera, California. The aliens are almost attractive in their surreal perfection, making them seem eerie rather than horrific, and their mysterious arrival feels otherworldly and serene, giving INVASION an unnerving and strangely magical feel. Well-paced and gripping, Siegel’s thriller also serves as a tender love story between Dr Bennell (Kevin McCarthy) and Becky Driscoll (Dana Wynter) who conform to the traditional macho male and submissive female roles consistent with the era.

An atmosphere of disorientation and fear pervades this cosy bourgeois corner as a gradual dehumanisation creeps into the ordered lives of a trusting close-knit community that gradually morphs into a climate of downright hostility and alienation. The “pod people” look and act the same, but progressively lose their emotional engagement. Crime novelist, Daniel Mainwaring, cleverly scripts the piece to reflect these subtle mood changes from slight cognitive dissonance through to full blown paranoia. Carmen Dragon’s moody score primps moments of romance with shrill melodrama to fabulous effect. INVASION OF THE BODY SNATCHERS not only reflects the socio-political zeitgeist of the era, it is a story that feels evermore timely in the middle America of today: When Dr Miles Bennell pleads with the police he could so easily be speaking to audiences here and now. MT.

Invasion of the Body Snatchers (1956) – first UK Blu-ray release, out for Halloween on 25 October