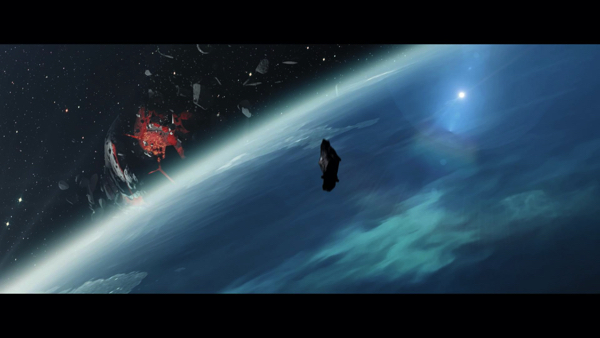 Director Simon Cox (Driven) has spent seventeen bringing this labour of love to the big screen, and his perseverance has paid off. Shot over six years, mainly in Birmingham, and with two years in post-production, Invasion was heavily dependent on crowd funding hence the 136 credits you can study on IMDB. The result feels like a pilot for a TV series, with the audience reactions anywhere between a sub-par Dr. Who and a cult movie.

In a futuristic Britain the Dunn family has been hit by a series of setbacks. Thomas (Haycock) and his wife Mandy (Drive) are mourning the loss of their young daughter Rebecca. He works as a psychiatrist in a private mental clinic under threat of closure, and she is a kindergarten teacher who has just become pregnant again, just as Aliens invade the planet, threatening to separate them in the chaos. Meanwhile, rogue general Lucius is threatening to explode a nuclear bomb. Tom’s plea to continue his work is refused, he and his assistant Clare Dove (Willcox, who also wrote the music) are made redundant. Tom soon finds himself in turmoil with three of his patients Harriet (Hoult), Samantha (Anderson) and Floyd (Steel). Finally, when the Planet’s superpowers decide to go to war, after Lucius detonates a nuclear bomb, Tom comes to a surprising discovery and must take Mandy on a race against meltdown.

Originally titled Kaleidoscope Men, after a TV series, which is watched by young Thomas and his friends in the prologue, Invasion plays out very much like a run-of-the-mill SciFi film with CGI playing a big part, hiding the minimal budget. The twist in the plot helps to overcome the restrictions to a certain extent, but the scenes featuring the emotional conflict of doctor and patient relationship keeps Invasion from being just another run of the mill Britflick. AS