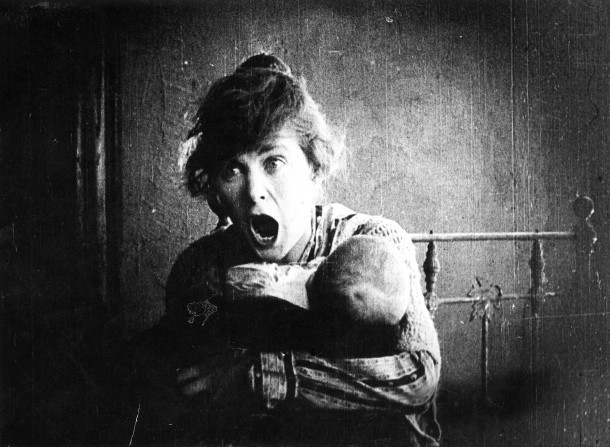 Premiering on September 5th 1916, when the First World War was raging in Europe, D.W. Griffith’s INTOLERANCE had cost $2.5 m (the equivalent of $46 m today) and was a colossal flop at the box office. What might have been the first “auteur” film in history ran originally for three and a half hours and combined four different narratives which were intercut. Griffith had started with the ‘modern’ episode of INTOLERANCE, “The mother and the law” – which was sometimes shown on its own – and featured a fight between workers and management, with strike-breakers and police involved in deadly fighting. This episode was finished before BIRTH OF A NATION was shown for the first time. Griffith then wanted to put this modern drama into historical context adding three historical events: Jesus becoming the victim of a power-mad Jewish religious establishment; the St. Bartholomew Night in France (1572) when the Protestant Huguenots were slaughtered by Queen Catherine of Medici; and the defeat and death of the Babylonian prince Balshazzar at the hand of the Persian king Cyrus, as a result of a religious conflict of followers of two Babylonian deities in 539 BC. As a form of interlude, Lillian Gish is shown rocking a cradle, representing the positive symbol of humankind. But Griffith ends the film with apocalyptic scenes of the destruction of New York.

Griffith employed no fewer than six assistants, among them the future directors W.S. Van Dyke, Erich von Stroheim, and Tod Browning. The massive towers of Babylon had a height of 70 m, at Belshazzar’s feast more than 5000 extras mingled in the huge hall. And one of battle scenes in this episode was filmed from a balloon, featuring 16,000 extras.

Even the critics of the time preferred the rather racist BIRTH OF A NATION to INTOLERANCE, failing to understand the narrative structure of the film, which was strictly non-linear. Later, Pudowkin and Eisenstein would copy Griffith’s parallel montage in their classic films of the Russian Revolution, and Cecil B. De Mille would employ the luckless Griffith to direct action scenes for THE TEN COMMANDMENTS and THE KING OF KINGS. In spite of founding “United Artists” with Chaplin, Pickford and Fairbanks in 1919, Griffith would stop directing in 1931, after a long series of mediocre productions, among them ISN’T LIFE WONDERFUL, which forced him to leave “UA”. Long forgotten, Griffith died lonely and embittered in a hotel room in Los Angeles in 1948; very few of his stars and co-workers attended his funeral. AS

INTOLERANCE is available on Masters of Cinema www.eurekavideo.co.uk from 8th December 2014