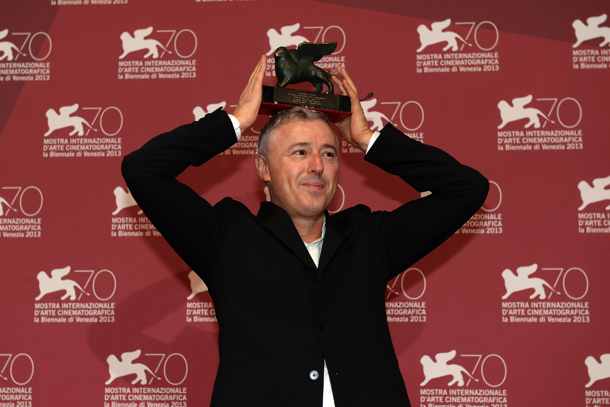 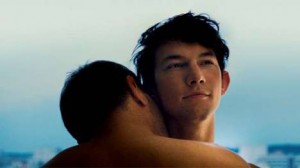 EASTERN BOYS come from all over Eastern Europe to Paris where they hang around the Gare du Nord. Some are as old as 25 but others could still be in their late teens. They might be prostitutes but there’s way of knowing. Fifty-something Daniel Muller (Olivier Rabourdin/Of Gods And Men) meets one of them, Marek (Kirill Emelyanov) who agrees to visit him the next day. But when the doorbell rings, Daniel is unaware that his life is going to change forever.

Meredith Taylor chatted to writer/director, Robin Campillo, about his latest film which won the ORIZZONTI Prize at VENICE FILM FESTIVAL 2013. He is a known for THE CLASS (2008), TIME OUT (2001) and THE RETURNED (2004).

MJT: Eastern Boys is a gay love story wrapped up in a migration thriller – where did the idea come from?

RP: The love story comes from a friend of a friend of about 55 who decided to adopt his former boyfriend of 35 or so who came from Poland. And I thought, how can I direct a film where the meaning of love changes?. And that was the challenge; to create the mutation that started with a sort of prostitution, then became more tender and gradually developed into a father and son relationship. And the other thing was that I wanted to create a character who was like ‘Boss’ (Daniil Vorobyov) who was at the same time frightening, enchanting and mesmerising. I love the idea of being afraid of someone but also by being attracted by them. And most of the time I think people are afraid of migration (and immigrants) and I find that exciting too, so I wanted to create a paradoxical situation here.

MJT: Now, in the film the younger man (Marek) attracts the older man (Daniel) by his charismatic gaze – did you intend him to be sexually submissive?

RP: I’m not sure whether Marek was a real prostitute but he uses sex to escape from his life and get what he wants – he wants to be desired by someone, and to re-gain his power (as ‘Boss’ the gang-leader, controls his life in Paris). He has empathy with Daniel and they get on but I don’t know what is going on between them actually. Daniel thinks he’s having a tender affair with Marek but all the time money is involved and he tends to forget that.

MJT: But Marek has sexual control over Daniel when they first meet at the Gare du Nord and that control continues…

RP: Well he’s trying to exert some power over his life and that’s the only way he knows how…maybe he has been taught by Boss how to behave in this situation so that he can get what he wants from Daniel…he (Marek) thinks he has the control because of the sexual power he has over Daniel but once they start their relationship, I think Daniel has the power…

MJT: Yes, and especially at the end…but we won’t reveal what happens there. What was the idea to set part of the film in your own apartment?

RP: It’s a thing about invasion (laughing) sometimes invasion can be positive..being invaded created a lot of things in the world so I like the feeling of being invaded by my own characters in my own film and my own space –  it all felt very weird and very exciting..

MJT: Did that continual spontaneity with the actors lead you to have to keep changing the script and re-writing during filming?

RP: Yes – before we started the shoot I didn’t realise that some of the Russian actors couldn’t speak English so, nine months before the shoot, I asked them to come to the apartment with Olivier Rabourdin and we did improvisations of a lot of the scenes and the party and they collaborated with me. Afterwards I went home and I re-wrote a lot of it..I used to think that directing a film meant being in control of it but I let go of this control and it became very exciting…I abandoned myself during the shooting and I wanted the others to do my film and it was a great idea.

MJT: Did you like that feeling of letting go?

RP: Yes, so much..I was mesmerised by the fact that they could take over the film. Of course, there was some germs (seeds) in my script to begin with but the collaboration then became so much more exciting – we had two cameras during the shooting and played with creating a different atmosphere with each and I found that very inspiring because it’s not like you have a programme when you wake up in the morning. You need to stay flexible and be surprised by what happens. I now have a lot of distance from my film and I love my film because it doesn’t belong to me and I that’s what I mean by being invaded by other people..foreigners… and yet to learn a lot myself.

MJT: Well film is really teamwork and certainly so in this case.

MJT: Tell us about that.

RP: Well I’ve known Laurent for about 30 years or so and we are very close and good friends. When we did THE CLASS we were using three cameras and didn’t have a fixed project it mind. So we decided to look to the actors and let them create the characters. It was amazing to create that atmosphere where everyone is a little bit free. And I know now that whatever the story, we need to keep that feeling. It took me time to realise this but it always depends on good casting, so I always use good actors – the actors and the locations are the most important things in the film…for me.

MJT: Marek is amazing – he’s got a particular sense of vulnerability and he’s instinctive – where did you find him?

RP: It took me nine months..I searched all over the internet for my actors and watched them in many Russian films, not very good films I must say, and when you see bad films, and this is important, that’s when you can see who good the actors are…someone tried to tell me in France “you took these guys off the street” so I told him “please…he’s an actor, he’s been acting for years”. And Marek comes from a family of actors; he’s been acting since he was five. And you don’t even see the techniques with him because he’s so good. Between takes, he’s fiddling with his ‘phone but when you say ‘action’ he immediately starts to act. During the film I only told him three things and he’s so quick to learn and he understood everything. I’ve never met an actor like this – you just have to tell him a few things when you want to make some adjustments and he’s knows the character completely – he’s an amazing actor and, as you say he’s instinctive – he never asks you any questions – he just plays the part as you want it or completely differently – if you want that too..

RP: Yes that’s right. That’s why I chose him because actors wear their lives on their face – and it’s very important to spend time to find the right casting – you can feel their life from their face without asking them. You don’t have to hear about their sad story with their last relationship. When you chose an actor, you chose a history on his face. That’s what cinema’s about. You don’t have to push things – things exist before you come along, you just have to find them. He has his own story and it’s rich for this character, he has this way of looking..

MJT: He has a world-weariness about him..

RP: Exactly – that’s the word “world-weariness”. You have a lot of expressions for everything…English is great for that!

MJT: Tell us about the look of the film. In the beginning it’s so disorientating…

RP: Yes the world ‘disorientation’ is for me a very important one. I like the idea that I lose myself: the spectator in the middle of nowhere with no compass! Debating what’s happening in this film. I want it to be (a) chaos! Very much like in THE CLASS – then after a moment you realise that there are characters and a relationship between them. You are the spectator and you are creating your own story, and you get lost occasionally and you have to focus a lot to see the fiction appear.

MJT: When you wrote VERS LE SUD (a drama about female sex tourism, starring Charlotte Rampling and directed by Laurent Cantet) it was about older women going with young boys, here you have an older man with a young boy. This oedipal/dominant relationship seems to fascinate you?

LC: Yes – it’s very strange because, I didn’t think a lot about it at the time but I must have a thing about it. I think what we call prostitution, or sex with money, is an important way of talking about domination and especially occidental domination in the world today. It’s a way of thinking about social differences but also about ‘desire’. I think prostitution will become much bigger because of the internet and because of people getting older…and wanting ‘desire’ in their lives.

RP: Yes chemistry…people want to live more and have more experiences and I think it’s going to be huge. And I don’t mean that’s good or bad…I’m not judging..

RP: What we loved in VERS LE SUD was there were two kinds of minorities – women can be a kind of minority: they can be dominated a lot. So if women were dominated in their own lives they were going there (the Dominican Republic) to gain a little bit of power and desire. These films are about two types of people who were being dominated and now dominate a little bit. We found that fascinating.

MJT: So what’s next?

RP: This time I’m going to make another fantasy film (LES REVENANTS/The Returned was his first) with much more money! (laughing)

ME: So financing is not going to be a problem..

ME: And who would be your fantasy actress?

RP: Well I love Catherine Deneuve – but it’s a fantasy…(laughing)

ME: Well I hope your fantasy comes true. Thanks very much Robin Campillo.

EASTERN BOYS IS ON GENERAL RELEASE FROM 5TH DECEMBER 2014