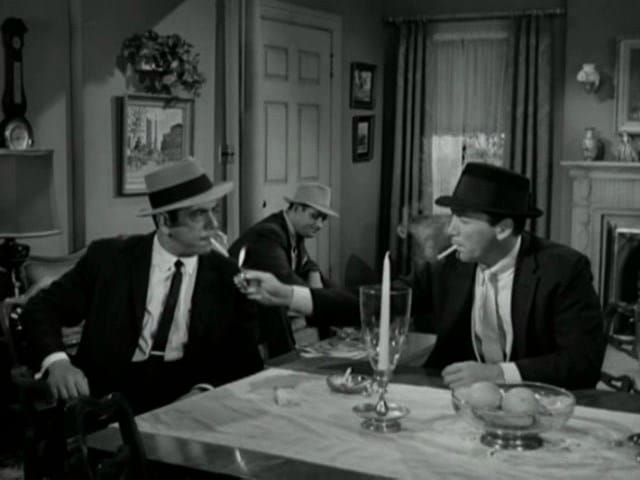 The title of this film suggests a “now it can be told” drama-documentary along the lines of The House on 92nd Street and I Was a Communist for the FBI, but for most of its running time it’s actually more a remake of Lewis Allen’s Suddenly (1954), which had depicted a hit man holding people hostage while lying in wait for his intended target.

The enormous success of the TV series ‘The Untouchables’ having recently sparked a wave of gangster films that nostalgically returned to the 1920s, this lively exploitation quickie from Allied Artists brought the on screen depiction of organised crime bang up to date by purporting to recreate the Apalachin criminal summit of 14 November 1957 at which about 100 underworld bosses were swooped on by the law (rather more than the budget of this film permitted), which had forced FBI director J.Edgar Hoover finally to acknowledge the presence in the United States of the Cosa Nostra and brought both public and official perception of contemporary organised crime bang up to date.

The amount of plot Orville H. Hampton’s script manages to cram into just 72 minutes – engrossingly juggling high-level mafia power politics with a ticking clock and the drama of hostage taking – recalls the classic pre-code crime films of 25 years earlier, as do the sharp suits (although the ponytail and slacks worn by Carol Nugent as the more pert of the two sisters taken hostage serve as a continuous visual reminder that it’s now the 1950s). There is a probably deliberately tongue-in-cheek quality to the way these Mafiosi couldn’t be more conspicuous if they tried. Cameron Mitchell, nattily attired in dark glasses and felt hat (like his equally immaculately dressed henchmen Robert Strauss he keeps the hat on indoors; maybe to signify that he’s on duty) visibly still cared about his acting in those days, and plays the hit man to the hilt. As his intended victim, Grant Richards brings real authority to his role as crime boss Johnny Lucero when he finally appears. Great fun. @Richard Chatten