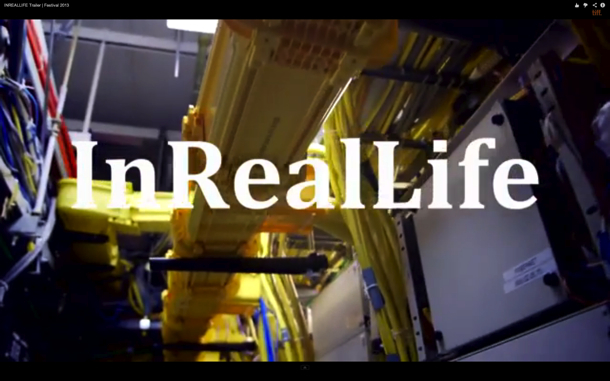 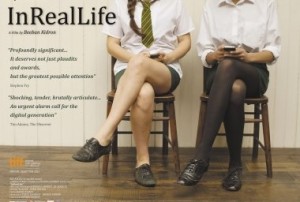 Beeban Kidron is well known for her TV series, documentaries and dramas: everyone knows Bridget Jones:The Edge of Reason and Oranges Are Not The Only Fruit. Here she tackles the thorny subject of the internet, taking a look inside the sinister online world to try and find out how it’s shaping the future generation.

Not surprisingly, many of the large conglomerates refuse to take part so this at times feels slightly incomplete given that Facebook, Google and Youtube represent the lion’s share of what goes on online.  That said, InRealLife certainly offers compelling subject-matter, quite whether it’s worthy of big screen treatment is another question, given the inherent geekiness of it all.

Creative shots of underwater cables twisting as fish glide by, accompanied by a sinister, twanging sound and some corporate-looking footage of the large  global ‘cloud’ storage facilities in Miami, is about as cinematic as it gets: so visually exciting it certainly ain’t. There’s also a scattergun approach to the material that feels very much like clicking through a search engine giving snippets from no less than thirteen different professional commentators ranging from Norman Doidge, a neuroscientist; Wikileaks founder, Julian Assange and Sherry Turkle, who offers insight into the ‘authenticity of intimacy and connection through the internet’.

Given the startling fact that 40% of of teenagers spend more time with their friends ‘online’ than in reality; the message here is that perpetual internet usage does shape teenage brains encouraging behaviour that is at best, less socially-aware and, at worst, verging on sociopathic.

Perhaps the most depressing fact to come out of this film is that sharing on the internet also has a commercially driven element with the large conglomerates using our to  data to make money. And although google is ‘free’, the information that users offer in return has netted the googles of this world billions of dollars over the years. And there’s a nefarious element: google has recorded every single page that you have ever looked at and used the information to build an exclusive profile, almost as telling as your individual DNA. Eeek!