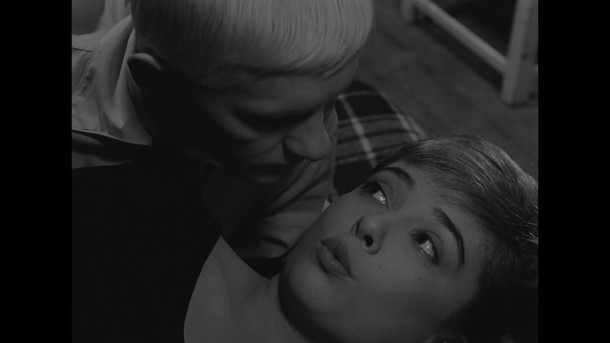 In early 1960s Warsaw, Bazyl (Tadeusz Lomnicki) is a young doctor who plays in a jazz band. He is a dreamer, not really unhappy, but indolent. His fake blond hair is one of the reasons for his popularity with women, but he is unable to commit to a relationship. At work, where he looks after the boxers of a state run club, he is equally bored. Only music seems to keep him alive, but afterwards he hangs around in the pubs, waiting for something to happen. Bazyl’s friend Edmund (Zbigniew Cybulski) hangs out with him during the long nights, hoping in vain to pick up one of Bazyl’s cast-offs. One evening, the two men set a trap for Edmund to get off with one of the girls, but the young Pelagia (Krystyna Stypolkowska) does not fall for it, and Bazyl – largely through boredom – spends the night with her. He leaves Pelagia the next morning, only to find her in his flat on his return: Bazlyl doesn’t want to acknowledge that he has fallen in love with her, neither does he want to show her any signs of affection. When she decides to leave, Bazyl lets her go against his better judgement.

Roman Polanski has a vignette in the film, playing bass. And although Wajda directed, the drama very much belongs to scripter, Jerzy Skolimowski’s; Bazyl being a prototype of Skolimowski’s hero in Walkover, who is like most of his protagonists, an outsider. INNOCENT SORCERERS is full of ironies and alienation. Bazyl and Edmund are running away from a society where they feel outsiders, but, equally, are not committed to anything else – they are directionless individuals, wasting their time. Hardly surprising, therefore, that Bazyl is no match for Pelagia, who looks through him from the start. Bazyl started out trying to manipulate Pelagia into Edmund’s arms, but ends up becoming her prey. Krzysztof Winiewicz’s camerawork shows melancholic images of a rather nondescript environment in 1960s Warsaw, the pubs are are as faceless as Bazyl’s studio flat. The characters seem to live in a void, only music keeping them alive. AS