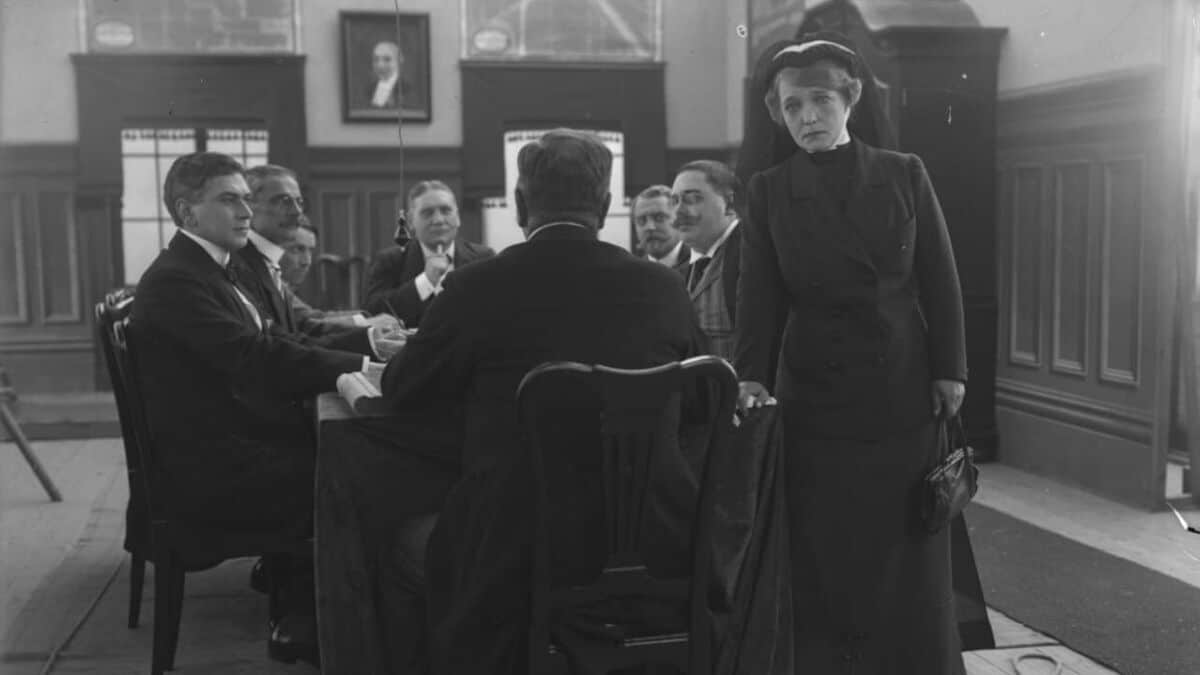 To anyone with a nodding acquaintance with silent cinema the idyllic opening scene depicting the happy Holm family will seem ominous rather than heartwarming; and when Ingeborg Holm’s husband starts placing his hand on his chest in discomfort, you know that trouble and strife lies ahead.

Based on a 1906 play by Nils Krok, it’s realistic and unmelodramatic depiction of hardship generated much discussion and led to changes in the poorhouse laws. A hundred years ago it would have seemed to the socially concerned that the current pace of technological process would ensure that poverty exacerbated by the harsh unyielding poorhouse regime endured by Ingeborg Holm would have become just a distant memory by the end of the 20th Century. More than 50 years later, however, Cathy Come Home (1966) showed that little had changed; and another 50 years has now passed since then. Ingeborg probably ends up costing the state infinitely more than the debts that forced her into the workhouse in the first place, where the irascible officials who have a budget to balance won’t pay for her to visit her sick daughter; but then end up having to foot the bill for the police investigation that tracks her down (just as the taxpayer presumably ended up paying for her later years in a mental institution).

The smattering of Danish films from this period that I’ve seen show that technically Ingeborg Holm is not really the trail-blazer it tends to be claimed. The naturalistic acting is less unusual for the period than those unfamiliar with silent cinema are usually pleasantly surprised to discover, the sets are convincing and lighting is skilfully employed by cameraman Henrik Jaenzon for dramatic impact; but Victor Sjostrom actually frames the action for the most part rather stiffly in the middle distance. It is the content rather than the form that really impresses.

There are no moustache-twirling villains. Even seemingly unsympathetic characters will show unexpected little flashes of humanity (such as the bullying old harridan at the poorhouse who then offers Ingeborg a sip from her hip flask; and the two coppers sent to recapture her). The nearest thing to a villain the film supplies is the jerk manning the counter discouraging customers and ripping off the Holms while Ingeborg’s husband is too sick to keep an eye on him. Having Ingeborg go mad is probably a surrender to the need for some sort of dramatic conclusion to the story. The rest of the film having been such a relentless downer, having her eventually reunited with her long-lost son (played by the same actor who had played her late husband) represents some sort of a happy ending. In reality she would look much, much worse after 15 years in the psychiatric ward than she does here; but the scene is played touchingly and without histrionics. (Although it raises again the question posed by other films with epilogues set several years later: was the main action set in 1898 or the epilogue in 1928?).

The atmospheric photography and period costumes and settings makes ‘Ingeborg Holm’ seem a lot quainter to a modern audience than it would have done at the time. In modern London she would probably end her days less picturesquely sleeping rough in a shop doorway somewhere.@RichardChatten