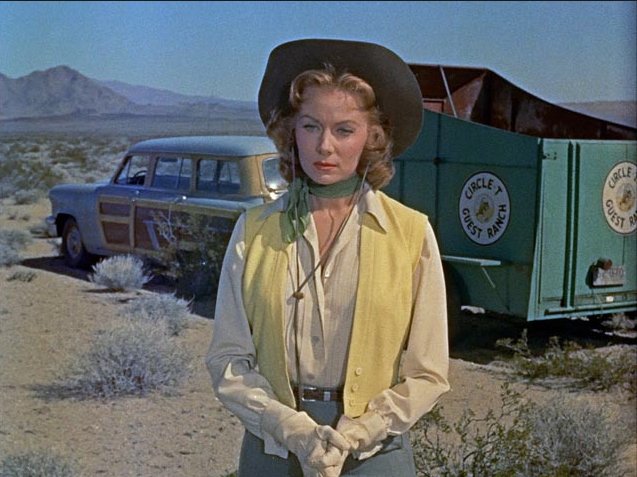 Although largely forgotten today, this ‘desert noir’ probably marked the early fifties apex both of the 3D film and the sojourn in Hollywood of director Roy Baker, who glowingly recalled it as “a very good story indeed”.

Robert Ryan, however, plainly had this movie in mind when he lamented that Cary Grant got the glamorous parts while he had to make do with “deserts with a dirty shirt and two day growth of beard” (although he forgot to mention also having a broken leg). Rhonda Fleming as his faithless wife, on the other hand, is dressed to kill in expensive finery throughout.

Shot in gleaming Technicolor by ace cameraman Lucien Ballard in Apple Valley on the edge of the Mojave desert, Baker said the idea appealed to him of making an interior film without dialogue. There’s actually a lot of talk in the finished film (including about what a jerk Ryan’s character was prior to the film opening not really bourne out by Ryan’s engaging performance; although those inclined to get sentimental about cuddly wildlife like rabbits and deer are likely to take umbrage at the way Ryan looks upon them purely as food), and in context such comments as “That’s my Rabbit!” and “Want a ride?” really hit the spot. Ditto the closing line. @Richard Chatten