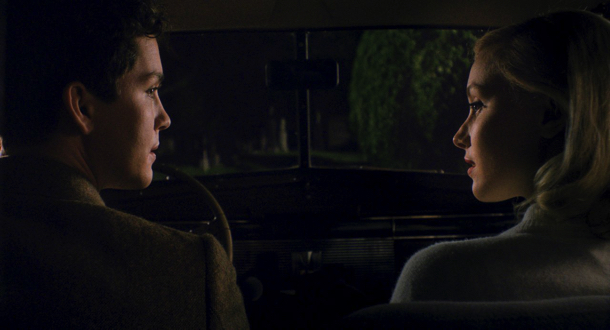 Themes of love and religious commitment play out in this impressively mounted and gently affecting drama with dynamite performances from Logan Lerman, Tracy Letts and Sarah Gadon. Lerman plays Marcus Messner, an aspirational A student from a strict Jewish background who dreams of becoming a lawyer in the Supreme Court and avoids conscription to the Korean war by winning a scholarship to Winesburg College Ohio during the close-minded society of 1950s America.

Despite identifying as an atheist, Messner finds himself sharing a room with several disruptive Jewish boys (Philip Ettinger and Ben Rosenfield) who are desperate to involve him in their Fraternity. Against his better judegement, he then falls for the charms of fellow student Olivia Hutton (Sarah Gadon) who is sexually experienced and emotionally unstable despite her respectable background.

Consumed by passion and finding it difficult to fit in, Marcus is transferred to a single room but not without the intervention of his college rector, Dean Caudwell, who debates the pivotal issue with him at length in a coruscating battle of wills and one of the best scenes of this intelligent drama. Schamus focuses on the intellectual and cultural aspects of the narrative rather than delving deeply into its romantic ideals: the love affair is there to serve the story rather than the other way round, and what transpires in the aftermath involves a deal with his mother (a superb Linda Edmond) who reads the riot act as only Jewish mothers can.

INDIGNATION is an absorbing and accomplished literary adaptation for James Schamus and a storming start to his filmmaking career. MT

IN SELECTED ARTHOUSE VENUES FROM 18 NOVEMBER 2016