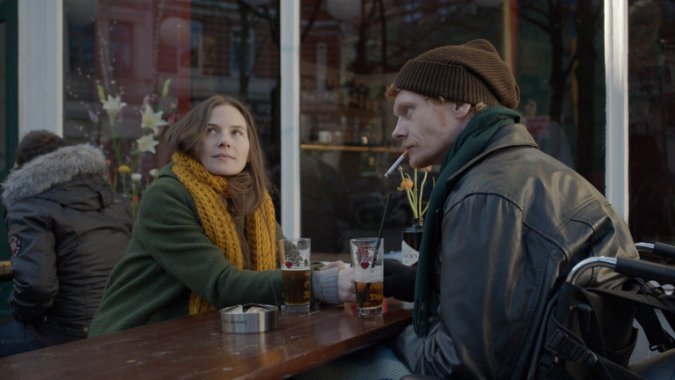 French born writer/director Samanou Acheche Sahlstrom’s feature debut is an intense and emotional affair carried by a superb first performance from Lisa Carlehed as Maria, a nurse taking a patient from Copenhagen to Switzerland where he intends to undergo voluntary euthansia.

This could have been cringeworthy or mawkish but Shalstrom’s narrative takes a very rational approach to the topic of end-of-life care but also weaves in themes of patient/carer relationships. To start with neither Maria, in her mid-thirties, nor Niels (Plaugborg), her patient suffering from progressive MS, are in any way idolised – on the contrary, Niels is shown as a bitter, twisted and egocentric young man whose character traits were very obvious before he fell ill. His mother and brother are witness to this and Maria is also often the target of his aggressive, provocative and self-pitying behaviour.

Maria does not like herself; minor but self-inflicted injuries are the symptoms of her sex life which boarders on the masochistic. She needs to punish herself permanently in small ways and Niels obliges only too willingly. Even though his family and Maria are conscious of Niels’ nastiness, they do not want to help him make use of assisted-suicide in Switzerland, despite the approval of a panel of doctors. When Niels gets particularly unpleasant with Maria, she changes her mind and they set off for Switzerland. On a stop-over in Hamburg, where Niels insists on visiting a strip club on the Reeperbahn, Maria learns that he has a five year old son, his mother Julia (Wokalek) refusing to let him see his son. The final scenes in Switzerland are handled with great sensitivity and humanity.

IN YOUR ARMS is analytical, without being didactic. Sahlstrom’s characters are suffering in their different ways and there is no league-table for unhappiness here. Maria’s misery – she does not want to accept (never mind love) herself – is rooted in her lack of self-confidence, for which she over-compensates with being too nice to everyone – apart from herself. But her demons are spoiling her life and she can therefore identify with Niels, who wants to kill himself because he too is suffering from self-hate, unrelated to his illness. Two people, “unworthy” in their own eyes, are taking the journey to Switzerland and the outcome for Maria depends on her learning a lesson from Niels’ life, which was in a way wasted before the illness. Whilst Niels ruined his own life with his arrogance and egoism, Maria is his mirror image: she is on the way to ruin her own life by a self-inflicted loneliness which alienates her from everyone, even the patients she is helping.

DOP Brian Curt Petersen has chosen a documentary approach, avoiding clichés, particularly in the hospital scenes and in Switzerland. Carlehed and Plaugborg feed off each other, showing how much they need their “mirror”. Sahlstrom’s direction keeps a cool Brecht-like distance, without understating the emotional impact of this superb debut. AS