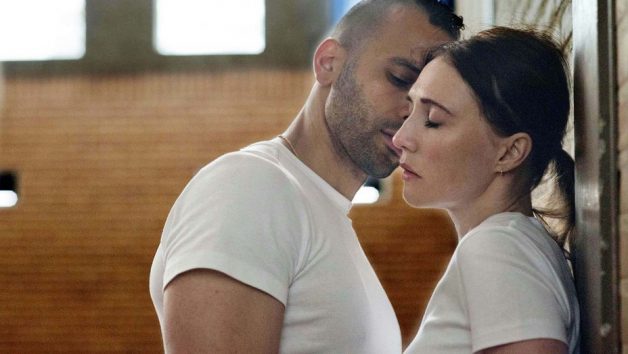 In this vicious prison drama a hospital psychiatrist and a violent rapist score points off each other – but who is chasing whom? Not an original idea but a brilliant riff on sexual in a film holds you in its uncomfortable grasp and positively radiates their palpable chemistry right through to the fizzing finale. But crucially there is nothing titillating about what happens between them and many will find what happens between them difficult to watch.

In her debut the Dutch theatre actor turned director takes on a tricky theme – and it doesn’t always work out. Although we are led to believe that Nicoline has fallen for Idris (Kenzari), clearly the feelings are mutual, and the criminal has had a lifetime to hone his abusive skills, but animal attraction shoots from the hip, rather than the intellect.

It all kicks off when Nicoline (van Houten), a rather blasé prison therapist at the top of her game, arrives at the squeaky clean seaside internment centre to deal with the transitional parole of a convicted sex offender. Although she’s keen to get on with the assignment, you get the impression there is a void in her personal life: during the induction interview her gaze drifts off in the direction of a travel poster. Clearly she’s looking for something beyond her work – but what?

Sexual sparks fly when she meets her patient Idris. Maintaining a professional approach is clearly going to be difficult in the face of this potent attraction. It doesn’t help that her only bedfellow is her mother (Schurmann), who insists on sleeping with her when she stays over in the luxury flat Nicoline occupies alone. She’s a bit too touchy feely for comfort.

Idris (Kenzari) is a mercurial character, his cheeky grin belying a nasty temper. And Nicoline tunes into this and disagrees with the other staff about the merit of his impending release back into the community. In the stark and clinical rooms where the patient and doctor meet, Reijn relies on body language and atmosphere rather than dialogue to drive the intriguing narrative forward. But what little dialogue there is – crafted by writer Esther Gerritsen – works well. And Idris’ lines expertly written lines also convey the psychological buttons he is used to pushing to get the right reactions from Nicoline. Clearly he wants her, but he wants to punish her too, and his machievellian style is learned behaviour from childhood. We find out nothing of his past, or the exact nature of his crimes, Reijn focusing on the here and now in this intimately-drawn games of wits and wiles.

Kenzari has an easier role than van Houten and he plays it convincingly. For her, it’s more of a complex role, and one that requires a great deal of subtlety, yet the subtext of her emotional arc is easy to understand. She needs to internalise her feelings, yet keep them brewing under the surface, and van Houten does this with instinct. MT