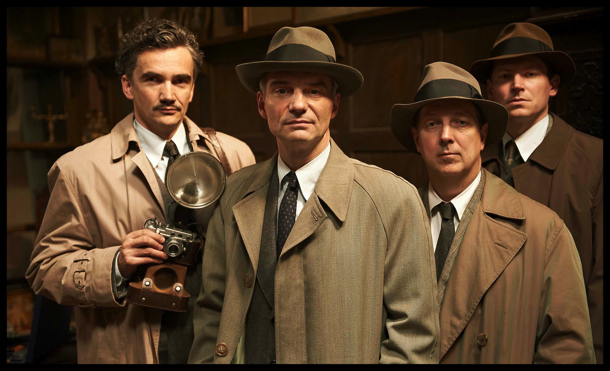 This Czech Republic Oscar entry 2013 is a film noir that takes us back to Prague 1953: Detective Hakl (Ivan Trojan) is working on a case of robbery where jewellery has been stolen, and a safe cracked open in a very unprofessional way.  Kirsch, a Jewish survivor of Auschwitz, living in the Jewish Centre of Prague, seems to be the main suspect, but Hakl soon finds out, that he is only the fall guy in a conspiracy which leads to the top of the Prague Police.  Hakl’s boss, soon to be promoted, has ‘arranged’ not only this crime, but also a robbery on a post office, where a huge amount is stolen, and witnesses, including a police officer, are killed.

All this is set up to prosecute members of the Jewish community as ‘Zionist agents, who rob the state to buy weapons for the Zionist state as part of a worldwide American conspiracy’.  Hakl meets Zenke (Sebastian Koch), an Ex-SS man, who has returned from a Siberian prison, to help the Czech police with this case. Zenke, who can’t speak the native language, is shown as a piano-playing, cultured man, who flirts with Hakl’s wife Jilka and plays football with his son Thomas.  Hakl confronts Zenke, but he can’t stop the show trial of the  ‘Zionist conspirators’, and Zenke returns to Germany in a swap for a German spy.

This film has two sides: the brilliant aesthetics of the camera work; the sets (the film was shot in Lodz, Poland);  the haunting music that echoes the sinister mood and the restrained but subtly-convincing acting.  The bleak city; the grey buildings with the bullet marks of the Second World War; the lack of food and the dreariness of everyday life is wonderfully re-created.  The camera follows Hakl, from hunter to being hunted though the labyrinths of a decaying city, where it is never really light. This is a true film noir, which catches the joyless atmosphere of Stalinism perfectly.

Unfortunately, the filmmakers have, in their justified grievance against the Stalinist state, made the plot rather unbelievable, by introducing a SS man, fresh out of a Siberian prison as the main helper of the Czech police.  What help can the man give, when he can’t even speak the language of the country?  Where did he get the information, since he came straight from Siberia?  Why would the German’s swap him for a spy, since he has no value for them.  There a no excuses for the excesses of Stalinist policies, their crimes against humanity are well documented. But the filmmakers don’t help their cause in making them looking worse, by introducing a SS man as their willing tool.  Because we should not forget either, that the war criminals of the SS were sheltered by the West German state, helping them to avoid prosecution.  And Anti-Semitism was as rife in Germany as well as in the rest of Europe, which is proven by the help of the police in all the countries occupied by Germany, helping the occupiers to organise the journeys of Jews to the extermination camps.  A shame that such a visual feast depicting an important part of Czech and Jewish history is spoiled by an absurd plot. AS