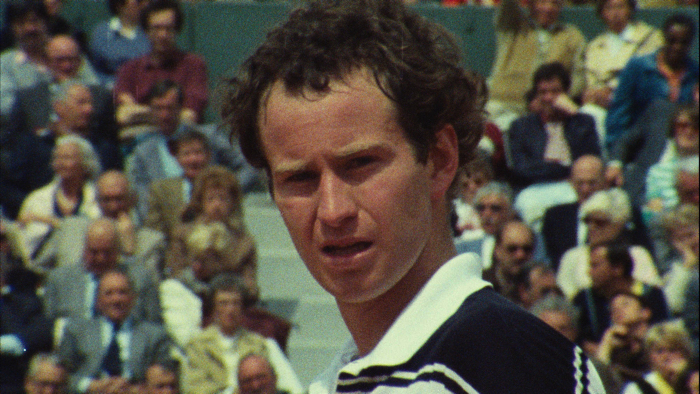 In the Realm of Perfection showcases tennis star John McEnroe at his very best – or worst – as some may say. Arguably, the enfant terrible of the tennis circuit was also one of the world’s finest and most charismatic players, his coiled force and balletic movements captured in fluid slow motion by specialist DoP Gil de Kermadec in Julien Faraut’s entertaining documentary.

John McEnroe: In the Realm of Perfection, was shot on 16mm during the French Open at Roland-Garros in the early 1980s when de Kermadec had determined that champions played in a different way when under pressure (in competitions) than when simply knocking a ball about during practice sessions. Using early 1980s computer animation he explores the intricacies of McEnroe’s techniques and particularly his unpredictable serve and killer backhand. The film considers the power and intensity of McEnroe’s physical prowess and dexterity combined with his highly-tuned reflexes and skilful strategies for outwitting his opponent. All this is scored to the music of Sonic Youth’s “The Sprawl” and narrated by Mathieu Amalric.

For those who were positively invigorated by the American athlete’s feisty temperament his puerile petulance and childish outbursts, this film is a must. Clearly from early childhood, McEnroe’s personality was founded on an egocentricity so keen that he was unable to see anything from any perspective other than his own. This coupled with a sheer disdain for the professional opinion of the linesman, umpire and other employees makes for hilarious often incredulous viewing. “You must be kidding” was one of his stock expressions.

Cleverly, Faraut gives us only once chance to watch the footage, leaving the ball firmly in McEnroe’s court and leaving the jury out, creating an onscreen tension which builds gradually in the film’s mesmerising final sequences when we watch McEnroe pitting his wits against Ivan Lendl in the 1984 men’s final at the French Open.  Force of nature and force to be reckoned with, McEnroe was certainly one of the powerhouses of international tennis. MT