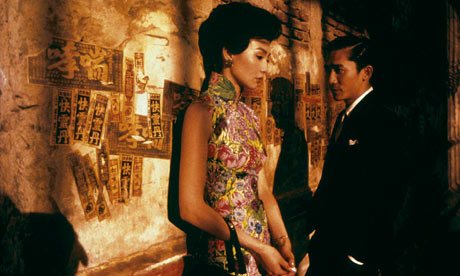 Wong Kar-Wai’s subtle (and only) masterpiece is a paean to disillusioned romantics everywhere. The mournfully reflective mood piece riffs movingly on what should have been or what could have been for two loves in 1960s Hong Kong. Tony Leung’s quietly seductive Chow Mo-wan is a journalist who moves into the same cramped apartment building as Maggie Cheung’s elegantly graceful personal assistant, Su Li-zhen. Attraction is mutual but tentatively discrete allowing us to reflect and muse on our own romantic encounters: deception, loneliness, loss and heartache. And as the two tease out the barest details of each other’s existence it emerges that their respective spouses are possibly having an affair. But the overarching theme of the film lies in the suggestive longing of love rather than its lustful consummation. 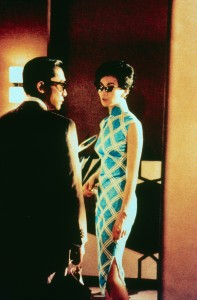 Maggie Cheung sashays seductively in beautifully cut cheongsams, her coal black hairdo caressing her high-cut collars. Tony Leung is a dreamy matinee idol with soulfully suggestive eyes and hand tailored suits. Sensuality smoulders as Christopher Doyles’ voyeuristic camera lingers on them longingly in chiaroscuro shadows and hues of crimson, lime and turquoise. Their sylph-like bodies caress the dimly lit corridors yet they glide past each other – oceans apart, their longing palpable. So much is left unsaid in a film that speaks volumes with its cinematic language and its elegaic cello score. And Nat King Cole croons cruelly with his Spanish words “Quizas, quizas, quizas”. Only perhaps.

The support characters are sketched out in deliberate crudeness leaving the central couple cocooned in their unfulfilled desire: the landlady Mrs Suen plays mahjong-mad all afternoon oblivious to Su’s predicament, her boss is occupied with his own affair. Chow’s crass colleague at work Ah Ping is lost in his own troubles. Are they too polite; bound up in old school etiquette – or simply too unsure of each other’s feelings to take things further?.

The Fado-esque finale is both heart-rending and, in part, revealing, as Chow whispers his unexpressed desires and regrets into a stone oracle at Cambodia’s Angkor Wat temple. Sadly, the film’s sequel 2046 fails to develop the narrative in any satisfactory form. MT