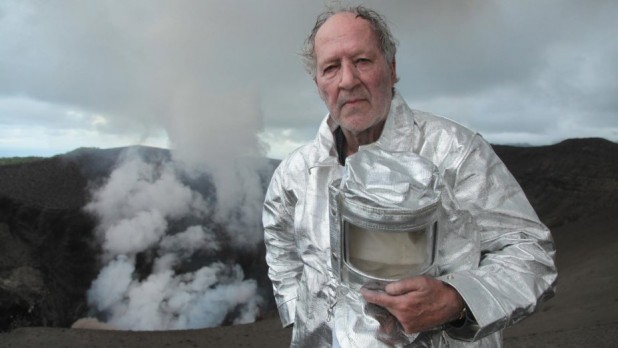 Visionary filmmaker Werner Herzog seeks out the world’s most apocalyptic natural wonders in his latest film INTO THE INFERNO that comes hot on the heels of Low and Behold, It is a rambling but informative piece of filmmaking that will certainly appeal to devotees of Herzog’s inimitable style. Some of the images are so breathtakingly ethereal and often frightening, it’s difficult to believe they are actually real, flashing before our eyes to a score of operatic music. What seems to fascinate Herzog is their primordial ability to challenge our authority, exemplifying the essential fragilitiy of human existence. They also offer great filmmaking potential.

As his specialist guide and travelling companion Herzog choses the fizzingly enthusiastic Clive Oppenheimer, a leading luminary on the subject who offers scientific detail and he authoritatively engages with local experts as the duo journey through the South Pacific, Indonesia, Ethiopia, Iceland, North Korea and back to Vanuatu, whose inhabitants celebrate their volcano every Friday night. Some of the volcanoes are dormant, but some are still active spewing their firey red magma, billowing gas clouds and pumice showers over lush hillsides and stony ravines. Some photos are taken from space to capture the magnitude of volcanic crater lakes.

The Afar region in Ethiopia is the hottest place on Earth and Herzog and Oppenheimer can only enter with a miliary aide due to local hostilities. Here they discover the world’s best collection of fossils and hundreds of obsidian chips which, when fashioned into blades, are sharper than steel and were once used for eye surgery. In one of the film’s digressions, they meet up with a crackpot scientist and fossil hunter from California who describes how, thousands of years ago, the human species originated here as one type and gradually spread out to Asia, Europe and beyond where we different languages and characteristics developed. It also emerges that a massive volcano in prehistoric times nearly wiped out humanity.

In Iceland, Herzog gets to visit the Dead Sea scrolls equivalent, a revered manuscript that details and describes volcanic activity back to the Dark Ages. When invited to North Korea, Herzog accepts that his visit will be tainted with propganda. Here the main volcano is considered the mythical birthplace of the Korean people, and now a sacred site of pilgrimage. We meet a group of uniformed students who chant a (staged) anthem for the volcano, even though it has been inactive for over a thousand years. Oppenheimer is suitably deferential. Clearly he sees the authorities as more frightening than the possibility that the volcano might erupt. Although INTO THE INFERNO occasionally veers off into a field trip for Oppenheimer, especially in North Korea, it nonetheless provides absorbing entertainment for lovers of the natural world, MT.