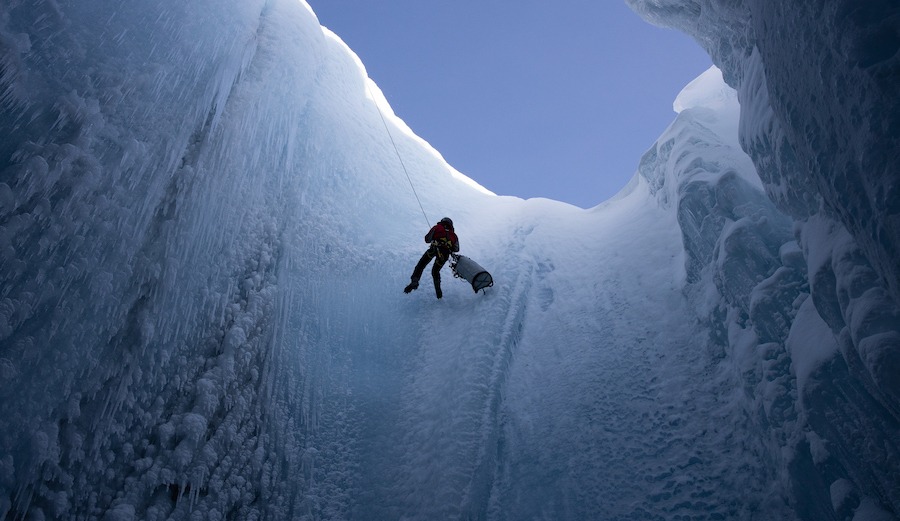 The edge of a cavernous ice moulin is certainly no place to take a selfie, as we find out in this spectacular documentary from director and cinematographer Lars Henrik Ostenfeld. He accompanies three scientists to glacial Greenland in search of what the ice can tell us about the future of our world. The cinematic journey plays out like a thriller with a gripping climax and some tears along the way, and, predictably there is no happy ending

Climate expert Jason Box, professor Dorthe Dahl-Jensen and glaciologist Alun Hubbard are the three intrepid specialists who are risking their lives to gather vital data on climate change. Most of the research can be undertaken via satellite but nothing beats actually being there to experience the treacherous winds, icy wastelands and spiralling depths of the ice moulins, vast frosty holes stretching into oblivion below the surface. Ostenfeld’s endeavour is part of a project which serves not just as exploratory undertaking but also to raise awareness of the critical stage at which our world has now arrived.

When it comes to scaling down into an ice moulin Alun Hubbard is certainly your man.  Beaming with confidence he is chipper about the descent and certainly puts our minds at rest as he bounces down 175 metres into the black void below. And Ostenfeld is quite relieved to hand his camera over to security expert Claus Kongsgaard the following day. Apparently the conditions are ‘too warm’ and too dangerous for the director to accompany Hubbard who admits to being happy should he lose his life in the process.

Meanwhile, Jason Box is doing a  spot of yoga before measuring the rate of snowfall that in turn predicts the loss of pack ice below the surface. In a flimsy tent reinforced by ‘ice walls’ he hunkers down against the raging winds with his colleague Masashi Niwano. The two have trekked for 12 days in hostile conditions and decide they deserve another cup of coffee after gathering their vital evidence.

Professor Dorthe Dahl-Jensen is triumphant as she holds up a block of ice which is 5000 years old. In her study to predict climate change over the past 100,000 years she is able to see how the ice has changed through its bubbles of carbon matter. These courageous souls certainly lighten their heart-sinking  findings in a documentary that makes ‘the science’ as clear as arctic water, and as chilling. MT