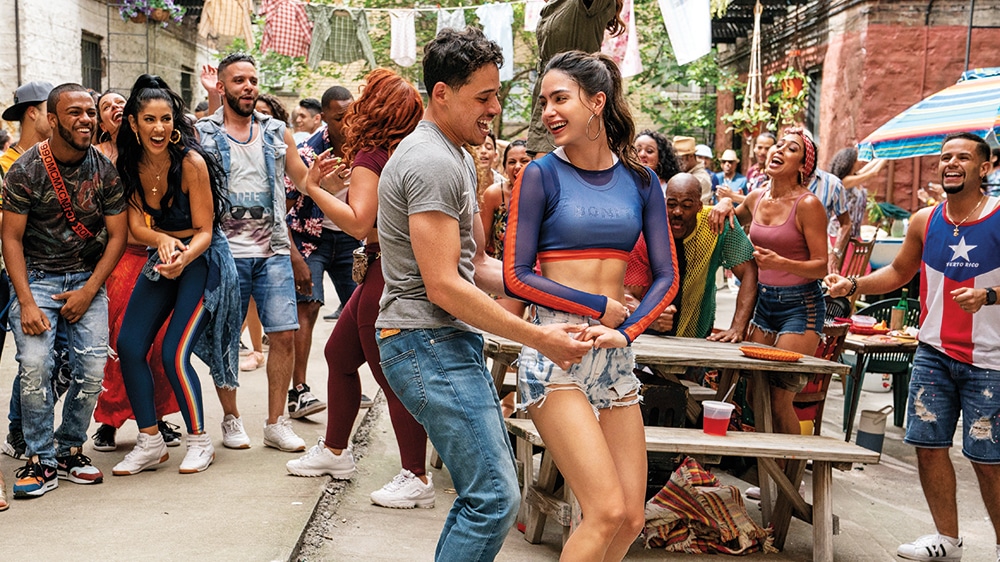 Director Jon M. Chu (Filthy Rich Asians) is behind this dizzying adaptation of Lin-Manuel Miranda’s In The Heights (written before Hamilton, when Miranda was still a student), based on the script of the original writer Quiara Alegria Hudes.

Released a year late due to the Pandemic, Heights is a musical extravaganza, combining Hollywood, hip hop and pop, with the narrative serving primarily as a bridge between the dance numbers, brilliantly choreographed by Christopher Scott.

The titular Heights are in Washington Heights, a 40-block ‘hood in New York City, that starts at 155th Street. Originally home to Jewish and Irish immigrants, and is now dominated by Latinos; with Miranda writing very much about his own experience. There is a permanent carnival atmosphere, spiced by social commentary – the fight for the much coveted “Green Cards”, while avoiding the clutches of the DACA (Deferred Action for Childhood Arrivals), commonly known as ‘Dreamers’.

The action is centred around two couples: bodega-owner Usnavi de la Vega (Ramos) is supported by his sidekick Sonny (Diaz IV), and madly in love with Vanessa (Barrera), who works for fierce real-life couple Daniela (Rubin-Vega) and Carla (Beatriz). Vanessa dreams of moving downtown and becoming a designer, but can’t get the finance.

Then there is Benny (Hawkins), a black guy who is dating Nina (Grace), the daughter of the cab company owner Kevin Rosario (Smits), Benny’s boss. Kevin is helping his daughters through law school at Stanford University, But Nina is unhappy at the ‘posh’ place of learning when she is mistaken for a waitress at faculty meetings. Nina decided to quit to the chagrin of her father.  Benny wants Nina to stay for his own sake, and the knowledge, that she help the fight against the authorities. Finally, there is Abuela Claudia (Merediz), the community ‘matriarch’, who, like many of her generation, wonder whether the sacrifices made for their kids have really helped in realising the American Dream.

Powerful songs”Carnival del Barrio” and the jubilant “96,000 Dollars” really set the night on fire along with a dancing couple in the sizzling set piece outside a tower building, the tenants looking down in disbelief. But the visual highlight captures the spirit of Busby Berkeley and Esther Williams, with 500 extras celebrating summer in the local lido.

In the Heights is intoxicated by its permanent carnival atmosphere, a barely disguised feeling of melancholia permeates this need for make-believe, best symbolised by Usnavi, an unreliable narrator, who relates the story to a small group of children at a more than perfect beach in the Dominican Republic. But overall this is a big party, the plot a side-show with its sleek social commentary, vibrant visuals provided by DoP Alice Brooks. The film strikes just the note for the re-opening of cinemas. It might be overlong, overdue, and still threatened, but relentless in spirit, nevertheless. AS