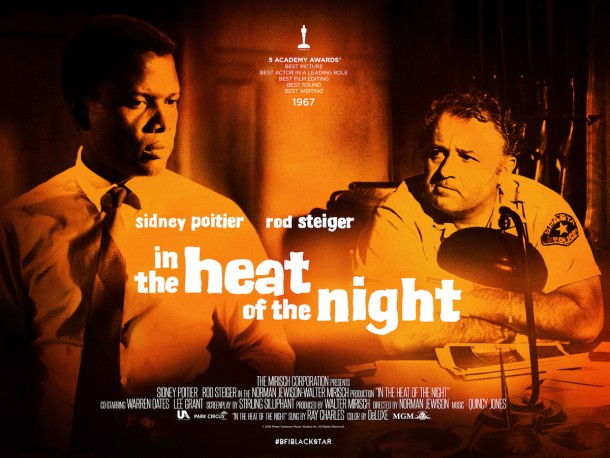 In the Heat of the Night (1967) Sidney Poitier tribute

Directed by Norman Jewison (Rollerball), and scripted by Stirling Silliphant from the novel by John Ball – In the Heat of the Night was shot during the height of the Civil Rights movement and the Anti-Vietnam war protests, in the openly racist Southern state of Mississippi. It was the year before Bobby Kennedy’s murder and Richard Nixon’s victory in the Presidential elections: this was not only a topical, but also a brave undertaking, considering the violent climate in politics which spilled over into the streets.

In the little town of Sparta, Philadelphia homicide detective Virgil Tibbs (Poitier) waits at the railway station for the next train, taking him on to Memphis. Tibbs is arrested, without reason by the sheriff’s deputy, Sam Wood (Oates) – just because he is black. For Wood and his boss, sheriff Gillespie (Steiger), Tibbs is a godsend: he is the fall guy for the murder of industrialist Colbert who has been killed on the streets of the sleepy town the night before. After Tibbs shows Gillespie his police shield, the sheriff checks his identity with his home precinct, then asks Tibbs to help him clear up the murder, since he has already imprisoned the second wrongly accused man. Against his better judgement, Tibbs takes on the task: his main suspect is the cotton farmer Endicott (Grates), who had a motive to kill Colbert. Endicott slaps Tibbs, who retaliates, making the stunned Endicott cry out “my grandfather would have shot you for this”. In spite of being chased by a deadly quartet of racist killers, Tibbs solves the case, winning finally Gillespie’s respect.

This is not really a whodunit but a portrait of Southern society still living in the days of the Confederation whose flag can not only be found on cars and buildings in this film, but still proudly raised above the Governmental Mansions (and many ordinary houses) in some southern States today. Tibbs is permanently taunted being called “boy”.  Meanwhile other black people in Sparta can’t get their minds round how a fellow black man could be a police officer.

Institutional racism is the order of the day and even the local café waiter ignores him. Verbal and physical threats poison the atmosphere – Tibbs is made to feel like a second-class citizen. The Voting Act of the 60s helped to restore some lawful semblance of order – at least at the polls, but the Supreme Court abolished it before this year’s election – making voter suppression in the South of the USA rife again.

The cast is stunning, but DoP Haskell Wexler is the real star (One Flew over the Cuckoo’s Nest, Mulholland Falls) is the real star: his images reflect the simmering heat and violence, the evil lurking in the shadows and in broad daylight. His confrontational close-ups of Tibbs and Gillespie show restrained anger confronting bullying prejudice. The seediness of the little town where Wood lurks voyeuristically, looking at naked white women, is symptomatic of the era’s repressed sexuality. Edited by director-to-be Hal Ashby, Jewison has created not only an aesthetically supreme film, but a political document, that is still resonant today, nearly 50 years later. AS