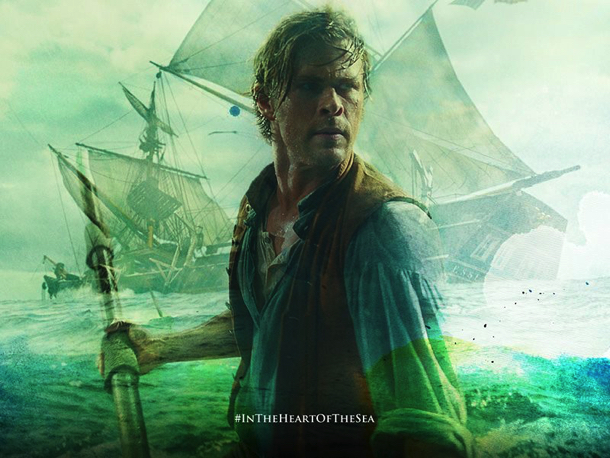 A vengeful killer whale; swashbuckling heroes; exotic islands and the legend of the Moby Dick:.Sounds like the perfect Christmas film, doesn’t it? But despite sterling efforts on all fronts, Ron Howard’s epic adventure IN THE HEART OF THE SEA manages to be curiously devoid of tension or even drama, doggie paddling its way to a deep and dark demise. This impressively mounted affair, taken from a real-life survival story that served as one of the key inspirations for Herman Melville’s “Moby-Dick”, sets sail with the best of intentions and a starry cast. Yet from the point where the good ship Essex embarks from Nantucket on a whaling mission with its trusty crew, you couldn’t care tuppence if any of them returned to tell their gruelling tale.

Despite the magnificence of the Nantucket whaling ship, built like a cathedral to withstand the ocean’s onslaught, the story feels strangely less horrific that of the simple sailing boat that met its fate in JAWS. According to legend, the vessel was initially laid low by tumultuous seas and later destroyed by a mammoth sperm whale in 1820. Flatly adapted from Nathaniel Philbrick’s non-fiction book by a solid crew of accomplished writers, the film attempts to rekindle man’s epic struggle against the laws of nature which ultimately reign victorious.

The film opens as Herman Melville (played by Ben Whishaw), arrives at the Nantucket home of old sea salt Tom Nickerson (Brendan Gleeson complete with an unsuccessful ‘Grecian 200o’ makeover), a former ‘Essex’ boat hand who has who lived to tell the tale, but didn’t – as we discover from his humourless wife .Buttoned-up emotionally since the harrowing tragedy, Nickerson is a broken man, but Melville demands a de-brief in exchange for a fist full of dollars.  Flashing back to 1820, we meet the young Nickerson (Tom Holland) as he begins his apprenticeship on the 21-crew whaler. Mission: to bring back as much whale oil as possible – a vital source of domestic energy before the discovery of West Texas Intermediate and fracking.

On board, the young patrician captain George Pollard Jr. (Benjamin Walker), comes into conflict immediately with his brassy first mate, Owen Chase (Chris Hemsworth). Hemsworth (Avengers) cuts an experienced and confident dash here but his hybrid accent is practically unintelligible and he is as unlikeable as his supercilious boss. Matters are not helped by second mate Matthew Joy (Cillian Murphy), a rather seedy close buddy of Chase but lacking both on the moral fibre and stsmina front. Pollard’s inexperience is blamed for most of the setbacks that occur on the fateful voyage.

Doing his best to evoke the salty seafaring sortie to those of us sitting in the cinema, Howard and his dp Anthony Dod Mantle send us ducking and diving among the waves, often from a bird’s eye view and sliding along the deck, to the point of queasiness,  as we attempt to focus on the action as Chase leads his dingy party as they savagely harpoon the exuberantly playful and defenceless whale colonies. The sight of blood and gore hitting the decks is reminiscent of Lucien Castaing-Taylor’s visceral documentary LEVIATHAN (2012).  At this point Nickerson is forced to enter the body of the moribund whale in a nauseous bid to salvage the best quality oil.

But it’s only when the ship enters remote waters of South America that the crew comes face to face with the real monster – a battle-scarred white whale as big as the boat itself, impressively crafted in all its CGI splendour. From then on, the venture becomes a harrowingly pitiful blow by blow account of 90 days stranded at sea – apart from a brief sojourn on a desert island – where we care even less as these ciphers’ bodies disintegrate. But while weird excrescences and straggly beards appear on their faces, they fail to achieve any redemption or moral epiphany; weirdly, Chase sports designer stubble whereas Pollard grows a full Afro hairdo as they score points off one another and indulge in the fine art of cannibalism.

Meanwhile back at base, Melville is fading as he tediously attempts to extract his best-selling tome from Nickerson’s bleeding heart revelations and we are forced uncomfortably to countenance his wife’s declarations of unconditional love.

The final scenes deal with the unscrupulousness of the business brains behind the shipping industry as Pollard’s elders attempt to stifle the real story, for fear of losing out financially. And it is their tight-lipped, starchy rectitude that embodies IN THE HEART OF THE SEA. Unappealing and unsatisfying as a drama, it has all of the right elements in place but, through a strange quirk of alchemy, falls entirely flat as an experience. MT