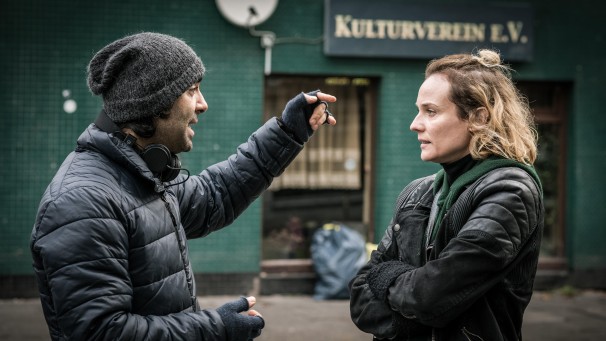 IN THE FADE is a hard film to watch after the events of Manchester, Westminster amongst many others. In it Diane Kruger plays a plain-talking hard-edged mother trying to cope with the death of her Kurdish husband and small son, murdered by a bomb in their German home town.

Since his gritty debut Head-On Turkish-German director Fatih Akin has remained faithful to his indie style and his ethnic-rooted dramas in a another film that is incessently grim, as the events would suggest. But none its characters are at all likeable accept, strangely. the German father of one of duo of bombers, who are purportedly neo-Nazi sympathisers.

Kruger’s Katya has married Nuri, a convicted drugs dealer, in prison. Clearly in love, the devastation she feels in the aftermath is palpable. And it’s a strong performamce, Kruger’s first in her native German. A really spiteful courtroom procedural records a unjust verdict and Katya repairs to the seaside to heal. Or so it would appear. It actual fact, in keeping with her tough persona, she’s pursuing the bombers to a small Greek resort. The film is a subtle as a mallet, and about as enjoyable as being hit by one. Diane Kruger won Best Actress at Cannes for her histrionic performance. MT