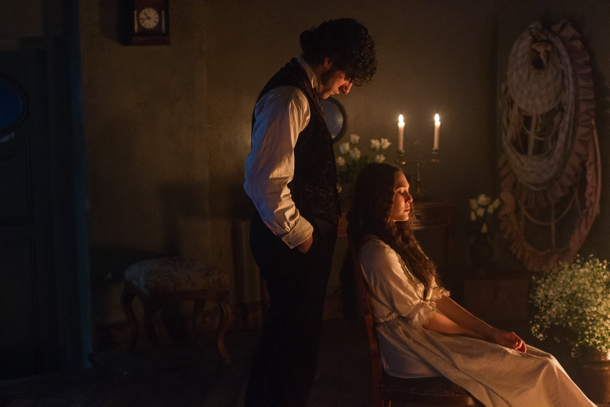 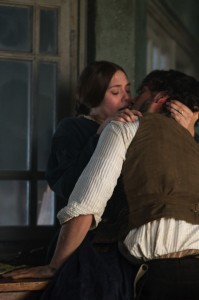 Based on Zola’s novel “Thérèse Raquin”, written in 1867, this is a surprisingly faithful adaption. Stratton captures the contradictory longings of these members of the petite bourgeoisie: to achieve power and control in their family circle by whatever means, while appearing serene and impressive to the outside world.

After the death of her mother, young Thérèse (Lily Laight) is farmed out to the country residence of her brother’s sister, Madame Raquin an impressively stern Jessica Lange. Thérèse’s only function in the household is to look after Madame and her sickly son Camille: The whole film echoes of “Thérèse, I need you”. When the children are grown up, Madame moves to Paris to run a small fashion shop, and the obedient Thérèse marries Camille: a loveless and sexless marriage leaves her even more depressed.  But when she meets Camille’s friend, a painter called Laurent (Oscar Isacc) who has been disinherited by his father for studying Art instead of Law, and who works in the same dreary office as Laurent, her life changes. She falls for the handsome Laurent, who is in love with life and women, slightly shallow, but a great improvement on Camille, who they decide to kill. But after the deed is done, the couple’s love turns into contempt and hate for each other. Madame Raquin gives in under the pressure of her friends to allow Thérèse to marry Laurent, and the couple hopes to get rid of her to inherit the shop and a decent amount of money. But Madame suffers a stroke, leaving her incapacitated and unable to speak, but she learns of the murder of her son. Ingeniously she finds a way to communicate with her friends, and Thérèse and Laurent see only one way out.

Thérèse, the wallflower and Laurent the pseudo-artist, seem to be outsiders, but when they mistake their lust for love, they don’t just elope, but become scheming murderers with the intention to inherit and so to join the petite bourgeoisie. IN SECRET shares much which “Carrie”, William Whyler’s film from 1952, based on Theodore Dreiser’s novel “Sister Carrie”, written only 23 years after Zola’s Thérèse Raquin. Shot in black and white, “Carrie” tells the story of a married man, trying to live with a younger woman, but his jealous wife destroys his career, and his young lover leaves him when he is unemployed. Both films explore the’ love versus bourgeoisie’ adjustment conflict, without being judgemental.

Jessica Lange dominates the rest of the cast, her bitter, resentful and ultimately vengeful matriarch is a great character study, as the mature Thérèse, Elizabeth Olsen is believable as a repressed “little girl”, who suddenly wants it all. The men are, on purpose, rather weak: Isaac’s Laurent is easy going but without scruples and Felton’s Camille is just a mousy mother’s son, ordering his wife about, when he wants to go back to the live in the countryside. The film was shot in Belgrade, where the small, darkened alleys with their miniscule shops, still exist today; the camera makes good use of them to express this grim and miserable story. Overall IN SECRET is a traditional, but well-crafted narrative exploring the contradictions of love and material ambitions in historical settings, but with very contemporary parallels. AS