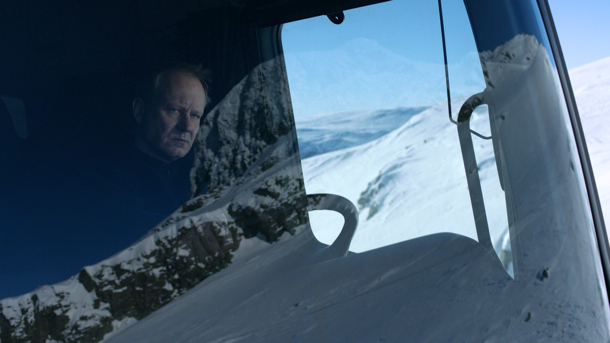 The late Bruno Ganz and Stellan Skarsgard star in Hans Petter Moland’s outrageously absurd follow-up to A Somewhat Gentle Man (2010). The film competed for the Berlinale Golden Bear in 2014 and went home empty-handed but its an honest and enjoyable crime caper and offers some of the best snowscapes of the year so far, and some arch political incorrectness.

Skarsgard plays Nils, a dour but appealing Swedish immigrant, who drives a snow plow and has just been awarded ‘Best Citizen’ by the local community. But when his son dies in a drug overdose, Nils turns vigilante to find out who is responsible.  That said, the tone is light-hearted and upbeat: Moland wanted s narrative reflecting what happens when society’s attributes of decency get mixed up with the baser instincts that kick in when we are threatened: “Norway has a history of being generous to people in need, but now this is being challenged” he said at the press Berlinale conference. “The comedic style was the best way to deal with this theme positively: Violence lurks within us and occasionally erupts in normal, well-adjusted people like Stellan’s character.”  What ensues is an unfeasibly violent chase to track down the two rival gangs of traffickers: one Serbian (lead by Ganz as Papa), one local (led by Pal Sverre at Greven).  There are some great gags arising out of ‘ad-libbing’ rather than sticking rigidly to Kim Fupaz Aakeson’s script that give this piece a fresh and authentic feel, although 115mins is stretching it for a comedy caper. MT.