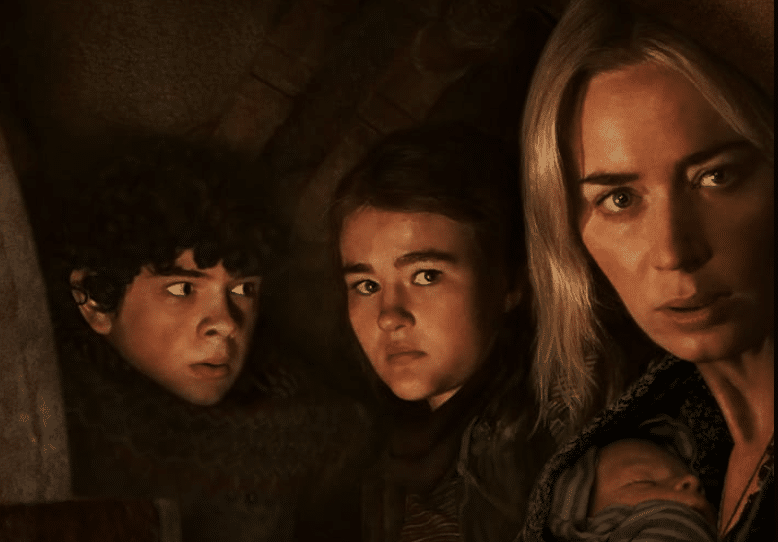 It’s a novel idea: an anthropod alien attracted to earthbound prey merely by sound. In a Quiet Place (2018), essentially a survivalist Sci-Fi thriller, was the brainwave of John Krasinski who wrote and stars alongside his wife Emily Blunt. As Evelyn and Lee Abbott they spend the entire film cowering in silence in the family farm in New York State while the predator  – who arrives from the heavens – rages outside. Part II sees Evelyn and the kids escaping across the Appalachian mountains where other dangers lurk.

Thriller-wise there are some clever beats here: the exquisitely sound-sensitive predator is an animal – not a robot – and can be destroyed by gunfire – keeping the story grounded, relatively speaking. This spider-like critter can also be repelled (for a time) by a loud transistor radio, held up like a cross to a vampire. Meahwile its horrified potential victims tiptoe around – in the serene splendour of the bucolic Buffalo countryside where they hide out in a disused factory. The well-honed family members feel real and relatable, Evelyn and her clever kids Marcus (Jupe) and hearing-impaired Regan (Simmonds) love each other, and it shows. There’s also a newborn in tow.

Krasinski successfully develops the storyline with a sequel that combines likeable heroes with stunning Sci-fi set pieces moving on from the ground-breaking reveal of ‘part one’. Pitting man against monster in a post-apocalyptic world feels entirely ‘now’. Horror lovers will enjoy plenty of jump scares and skeletons popping out of nowwhere to a pounding soundscape that jostles thunderous vibes with suspenseful interludes of silvan silence. Somehow this could be happening to you. MT

NOW ON RELEASE IN CINEMAS NATIONWIDE