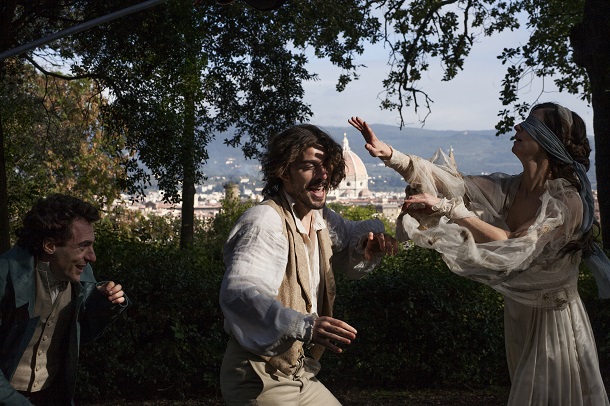 Mario Martone (Amore Molesto) takes on the crippled 18th Century literarary genius, Giacome Leopardi, in this ambitious but rather worthy biopic.  Sumptuously set in the verdant countryside of Tuscany and The Marche it stars Elio Germano (A Magnificent Haunting) as the lonely poet and child prodigy who struggles to break into fashionable circles despite a disciplinarian father and poor health.

Leopardi did not score heavily on the romantic front, unlike Lord Byron, who, despite his club foot, enjoyed a great deal of erotic attention from the opposite sex; Ippolita di Majo’s screenplay dabbles with some of his female fantasies in the shape of a young illiterate girl who dies early on and a ravishing Florentine countess, played superbly by Anna Mouglalis who lights up this otherwise rather dry biopic with her charm and elegance. Sadly she falls for his more good-looking and glamorous friend Antonio Ranieri (Michele Rondino). The only aborted action he has between the sheets is with a Naples prostitute, but this episode ends cruelly in humiliation.

With some clever editing to the earlier scenes this is, however, an art house drama that could appeal to audiences outside Italy, or those who are interested to discover more about Italian literature beyond Dante, Ovid and Catullus. Indeed, Giacomo Leopardi’s work embraces many of the tenets of Romanticism and there are some allusions to this in Renato Berta’s dreamlike cinematography although Sascha Ring’s contemporary music feels strange and incongruous in a scene by the waterside where Leopardi’s collapses in sheer desperation at his blighted existence and health problems.

As the drama progresses to Rome and Naples, it opens out visually with some magnificent landscapes of southern Italy and further opportunities to discover Leopardi’s moving poetry and learn about his ideas as a philosopher. This is an ambitious and watchable film and Elio Germano gives a strong and convincing performance as a tortured artist wracked with pain and mental anguish who was wiser of the human condition than his elders gave him credit for: “People are ridiculous only when they try or seem to be that which they are not”. MT