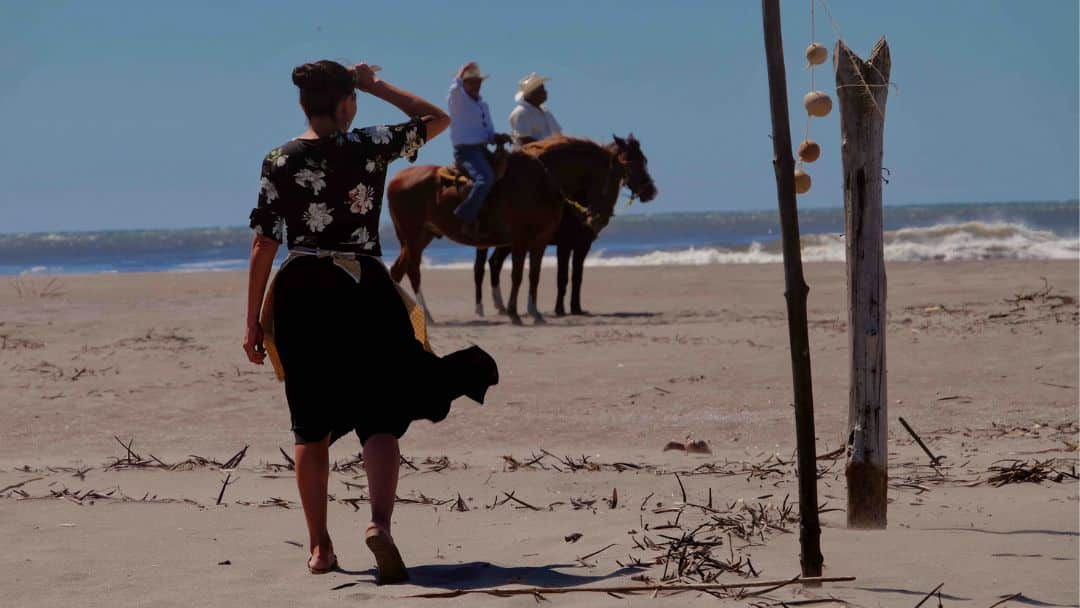 The debut feature of Mexican director/co-writer Julián Robles is, in the widest sense, a re-working of John Huston’s 1964 classic Night of the Iguana, based on the Tennessee Williams play of the same title. But where as Huston’s failed hero is a defrocked priest, lusting after a blonde nymphet, Robles’ equivalent is Gerardo (Ferrer), a gay man living in a household of women.

The film starts with a death  – we learn later it was Gerardo’s father who was killed in his pick-up truck after a train him at an open crossing. The matriarch, grandmother Dona Dolores (Huertas) believes he was killed by the Narcos who wanted his land along the beach of the ocean where the family runs a struggling holiday camp. Gerardo is sure his father would have accepted the money from the drug lords – a scenario that seems contradictory to Dolores’ extreme suffering.

But Gerado’s main concern is his mother Mercedes (Heredia), who constantly puts him down for his sexual orientation. We are – after all – in Mexico, a bastion of machismo and the Catholic church. But then, young Elia (Batalia), has already left the Church and joined a sect, making her even less worthy than Gerardo in Dona Dominga’s estimation. Elia’s current boyfriend Mario (Alvarez) lives in an artist colony with German ex-pat Ludwig (Hevia), and wants to leave with Gerardo, now divorced from his wife. The tension mounts, and the solar eclipse, highlight of the tourist season, brings out the best and worst in all concerned.

The family is full of odd-balls: there is Indira, named after the ex-premier of India, who, does the accounts in the middle of the night, but is up to her secret dealings away from the house. Dona Dominga tries to rule un-impeded, but there are too many secrets in her closet, and when she finally decides to sell, it is too late. But there is humour too: the train which killed Gerardo’s father, used to stop near the beach, “but now it doesn’t even stop when somebody is killed.”

Iguana is a visual treat and DoP Claudio Chea should get a mention for his subtle nighttime images and powerful impressionistic beach photography. And the ending is, for once, a real surprise. Iguana Like the Sun is full of smouldering passion, denial and longing. Like the Houston film, it is a chronicle of loss. AS