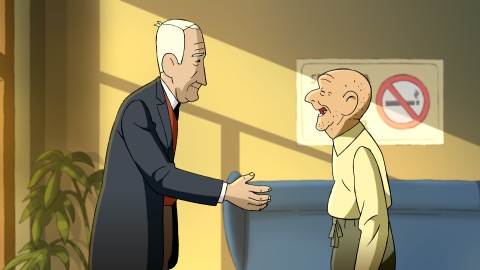 Matthew Turner spoke to Ignacio Ferreras, director of Tokyo Onlypic (2008), How to Cope with Death (2002) about WRINKLES (Arrugas) his latest film:

MJT: I saw the film in San Sebastian in 2011 and absolutely adored it. How did the project come about, first of all? Were you a big fan of Paco Roca’s comic book?

IF: Thanks. I probably should not mention this, but the film was finished right before that first showing at San Sebastian, practically without an hour to spare. It was a very crazy time leading up to that festival, I hope I never have to go through something like that again. I remember the last day of the festival, rolling up my trousers and wading into the sea behind the festival complex to get a moment of peace and quiet and adjust to the fact that after two years of non-stop work the film was finally done.

About Paco’s comic-book, I had not read it when the producer of the film, Manuel Cristobal, approached me with the idea of directing the adaptation. His proposal was in fact a brown envelope with the comic book and a note which said, “Are you interested?” or something like that. And of course I was very interested. So I was very fortunate, the project just came to me out of the blue, it was Manuel that brought us together.

MJT: How closely was Paco Roca involved with the film?

IF: Quite closely, although for the most part we were working in different countries, which is probably why we are still friends. Paco took care of all character design and was also involved in the writing. He gave me lots of additional material that he had accumulated while he was researching the comic-book but which he had not been able to use, and some of that material found its place in the film. 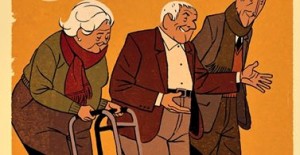 MJT: The film is very much like watching the comic book come to life. What are the main challenges involved in adapting a comic book into a film? Did you feel pressure to stick closely to the original artwork? How did you set about doing that?

IF: Was there pressure? That’s hard to say. I’d say not; there weren’t any situations where I wanted to introduce changes and I was overruled. For the most part I was left to do whatever I thought was necessary for the film, although of course I was always aware that I needed to remain reasonably close to the original work. It’s a difficult balancing act, on the one hand there’s a danger to just follow the inertia of the comic book and forget you are making a film. And on the other hand there’s the danger to start changing things for the sake of it, just to assert your authority over the film. I think something that was very helpful was the fact that I was working on the animatic in Edinburgh with my wife Rosanna Cecchini and we made a point that she would not read the comic-book but take my work as her starting point, so she could treat it not as an adaptation but as an original work from the start. And we had more or less a year to work on this in relative isolation, although of course we were sending groups of sequences to Paco and Manuel for feedback, but we had that space to develop the film as a film without having to justify why we were changing this or that. It is interesting that you say the film is like watching the comic book come to life because if you watch the film with the book in hand you’ll see that they are actually quite different, even if the film covers the main events in the book. But I think it is true to say that the film feels very close to the book, because it respects the intention and the characters of the book, even if some of the events do change. All too often adaptations completely change the intention and characters of the original work, like for example in Blade Runner; it’s a good film, but I wouldn’t call it an adaptation of Do Androids Dream of Electric Sheep? because it turns the intention of the novel on its head, and I don’t think that’s fair on the original work. So I like Blade Runner as a film but not as an adaptation.

MJT: Were there any particular influences on the film? Did you watch any other films or read any books in preparation? 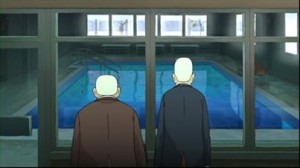 MJT: Do you have a favourite scene in the film?

IF: Not a particular individual scene. I think I was more concerned with the overall flow of the film and I can’t really think of scenes as separate from each other. To me the film is one big unit, I can’t say that I like one scene more than another… it’s a bit like saying what’s your favourite ingredient in a dish; you either like the dish or you don’t, but it’s hard to say what the best ingredient is, is it the steak or the salt that makes it tasty? It’s easier to say what you don’t like, when something has gone wrong and did not turn out the way you imagined, but I find it impossible to pick a favourite scene.

MJT: What was the hardest thing to get right?

IF: I think it was to get the right balance between being critical and being realistic about the budget and schedule. Animation films can be very dangerous in that way, you can easily become obsessive about the quality but of course the meter is ticking and the budget can evaporate very quickly, so you have to have a very clear idea of what standard of animation you can afford and then be consistent from beginning to end. It’s a question of making the most of what you’ve got. I imagine it is different when you are working with big budgets, but my experience working in European films, which always have a relatively small budget, is that you either have to sacrifice some of the visuals or some of the storytelling. If you spend too much on the visuals you’ll run out of money and you’ll have to start compromising on the storytelling. I decided to compromise on the visuals from the start, in order to not have to compromise on the storytelling later on. I think that was the right thing to do for this kind of story. Quite a few people have said to me that five minutes into the film they forget they are watching animation and they are just engrossed in the story, and that is, for me, the best compliment.

MJT: Did you cut anything out that you were sorry to see go?

IF: No, I didn’t cut anything because of lack of money or time or for any other external pressure, so anything that was cut was cut for the good of the film – I hope. If we had had more money, the film would still have had the same shots; they would have been finished to a better standard and they would been more beautiful to look at, but there wouldn’t be any extra shots or scenes. I cut lots of scenes that I really liked as individual scenes, but somehow they did not feel right in the flow of the film. I think this is perhaps the most important thing for a director: to be absolutely ruthless in your editing. “Kill your darlings” is one of those often repeated clichés, but I think it is right. Of course, when I look at the film now, nearly three years after finishing it, there are some things I would probably change, but that’s different.

How did you approach the casting for the English dub?

IF: I didn’t. The English dub was handled by the distributors and, although I think they have done a very good job, I did not have anything to do with it. I don’t think this is unusual, directors are not normally involved in the dubbing of their films to a foreign language. Of course in this case it so happens that I live in the UK and I speak English but that is just a coincidence. They would not have asked for my opinion if they had dubbed the film into Japanese (which by the way they didn’t, they used subtitles in Japan) so it is not surprising that I wasn’t approached when they dubbed Wrinkles into English. Now that this English language version is coming out I’m getting asked this question a lot, I think this is because dubbing a film into English is quite a rare thing and people are not really aware of how it works, but by the time Wrinkles was dubbed into English my work on the film had finished a long time ago. Generally speaking I don’t like dubbed films, but I think the dub of Wrinkles is much better than usual and the choice of Martin Sheen and George Coe for the main characters was very fortunate. 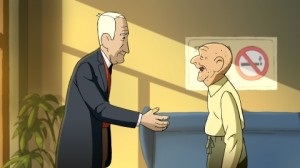 MJT: Are there any other animators you admire? Do you have any favourite animated films?

To this, I’d have to add  that I’m as influenced by live-action cinema as I am by animation, by the films of Kubrick, Kurosawa, Ozu and many many others. Although if I had to pick just one favourite film I think it would be Isao Takahata’s Only Yesterday (Omohide Poro Poro).

MJT: What’s your next project?

IF: At the moment I’m working on an animated feature about the life of Danish writer and philosopher Søren Kierkegaard, which is still in the early stages of script development. Yet again, it’s a story which might not seem like an obvious choice for an animated feature, but Kierkegaard was a really fascinating character and I think there’s an amazing film to be made about him – an amazing animated film.

WRINKLES IN ON GENERAL RELEASE FROM 18 April 2014