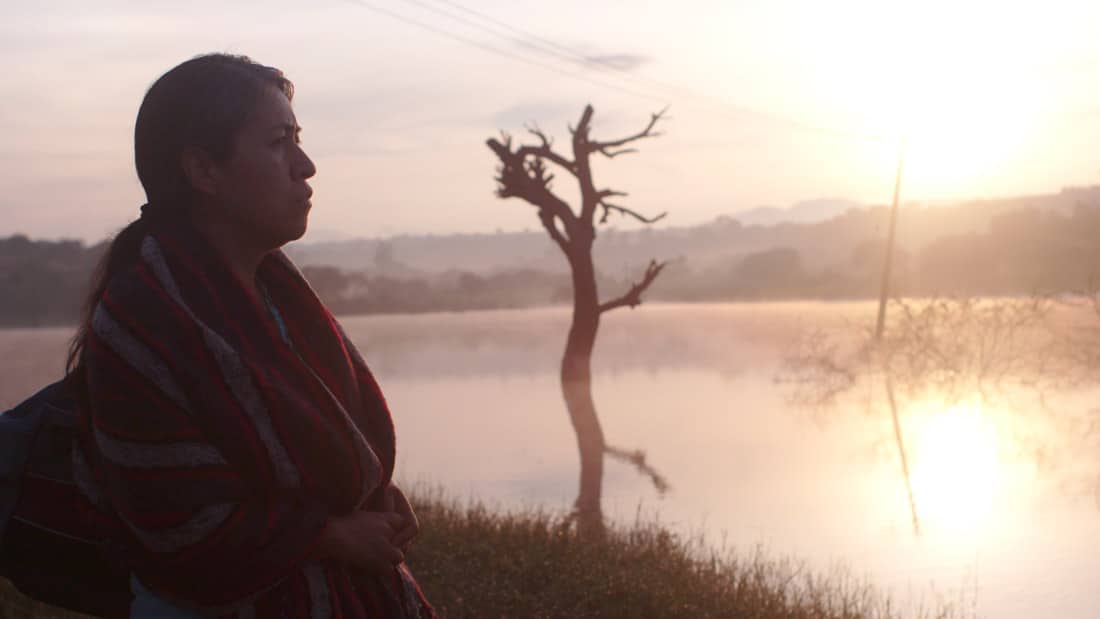 Identifying Features is an emotional fireball of a film showing a hell on Earth at the Mexican border with Arizona.

Poor Mexican farmers are caught in a trap between the cartel henchmen and the people traffickers promising financial security to these mostly young and naive locals on the Mexican side of the fortified border: the price is high: and it could cost them their lives.

Childhood friends Rigo and Jesus (Varela) have had enough of their restricted existence and set off from their little village in a perilous journey to the border wall. But the teenagers soon disappear for months without any sign of life, their families starting to imagine the worse.

For Rigo’s mother, the search for her son will be short and painful: photos of young men found dead near the border are shown to her – Rigo, easily identified by a white birthmark on his face, is one of them. The procedure is done in the most bureaucratic and soul destroying way. Magdalena (Hernandez) can go on hoping, and travels on to the border where Miguel (Illescas), a deportee, has just arrived after many years as an illegal in the USA.

The two will meet later. Magdalena does not learn anything about her son from the bus drivers she asks for help – just that buses are often kidnapped by cartel militia. Rigo was one of the victims on that fateful October the 15th, the day the teenagers boarded their bus. But Magdalena is told – in the lady’s restroom of all places – that an old man, who also survived the assault, is living in La Fragua near a canal.

So Magdalena sets out on her journey, meeting Miguel on the way on to see her mother. When the two arrive, it becomes clear that militia has raided her place and most probably killed the woman. But Magdalena presses on with her search for the old man, finally finding him in hiding from the militia. He confirm Rigo had been killed, mentioning his white birthmark, but does not know anything about Jesus’ fate. Trying to get back, Magdalena and Miguel are caught at night by the militia men, who are camping near a fire. In spite of their quick retreat into the woods nearby, Miguel is caught and shot. Magdalena, sure of her own fate, starts praying.

Whilst Hernandez is truly brilliant, the real star is DoP Claudia Becerri Bulos whose images of the countryside show utter desolation. The final part at the feature at the camp fire, where the devil dances, is simply extraordinary, with Magdalena’s face drenched in red.

The camera travels along inconsolable, melancholic and languid, panning Miguel from behind, his fate is somehow foretold, Magdalena remarking on his similarity to Jesus. She offers him a home, somehow fearing that her odyssey in search of her son will be in vain. This artful multi-award winning perspective on the Mexican migrant crisis is the the work of a remarkably mature newcomer, who has a bright future ahead of her film wise. AS