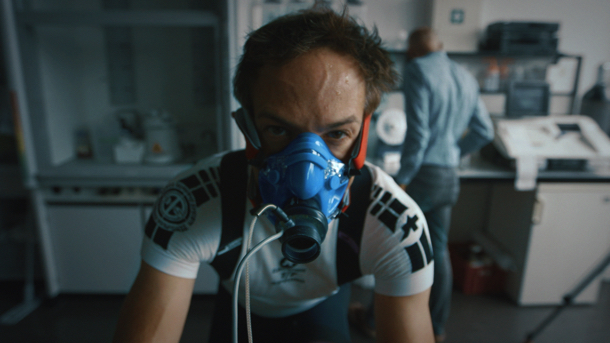 It started out more like a prank: amateur cyclist and filmmaker Bryan Fogel (Jewtown) wanted to take performance enhancing drugs to get into the top ten of the best amateur cyclists at the Haute Route mountain tour in Switzerland, having finished 14th the year before. When he contacted the Russian Dr. Grigory Rodchenkov (*1958), head of the Russian branch of WADA (World Anti-Doing Agency), to deliver said forbidden drugs, Rodchenkov was only to happy to deliver and monitor Fogel’s performance. Ironically the Fogel actually did worse on the drugs, so the filmmaker had a stunning success on his hands.

At the winter and summer Olympics in Vancouver (2010) and Beijing (2012) Russia fared very badly, and Vladimir Putin ordered “success”, particularly for the Winter Games in Sochi (2014). And results improved magically: whilst the Russian team finished sixth in Vancouver, on home soil Russia won 33 medals, including 13 Gold – coming first in the overall result. As it turned out, Dr. Rodchenkov had a big part to play. After being caught with his sister (also an ex-athlete like himself) dealing drugs in Moscow, he was sent into one of the horrendous “psychiatric” hospitals in 2011. His “redemption” on his release was to help the FSB (formerly KGB) to overcome the controls of the worldwide WADA organisation, in charge of monitoring and controlling the athletes. It helped, that the good doctor would be director of WADA in Sochi. There, he and his team collected and froze urine samples of Russian competitors before they started their steroid regime and human growth hormone injections, which Rodchenkov and his team later substituted for the contaminated samples taken officially by WADA at the time of the competition. They used a crude system of ‘re-distribution’, including the use of backdoors and hidden portals in the walls of the WADA facility.

Rodchenkov claims: “I don’t believe the Olympic Games could be won without any kind of pharmacological support”. And Don Catlin, former director of the UCLA Olympic facility, tested Lance Armstrong 50 (!) times during the latter’s career: his findings were always negative, before Armstrong confessed in 1913. Whilst Vitaly Mutko, who served eight years as Minister for Sport under Putin, was promoted to Deputy Prime Minister, another college of Rodchenkov died of a “sudden heart attack”. Luckily for Dr. Rodchenkov he had fled to the USA, and now lives under cover in the Witness Protection Programme, after The New York Times run his full confession.

ICARUS runs like a thriller: the charming Rodchenkov is first one to help Fogel to cheat, before investigations lead to the death of his friend and college – and threatens his own into the bargain. Fogel follows his every move, putting himself in a dangerous position. Whilst Rodchenkov had to leave his family behind, he at least got away alive. But it should not be forgotten that Russia is staging the Football World Cup next year, and that, after the majority of Russian competitors were banned at the Rio Olympics, these Russian track and field athletes will compete in London in August at the World Championships in front of a paying public. AS