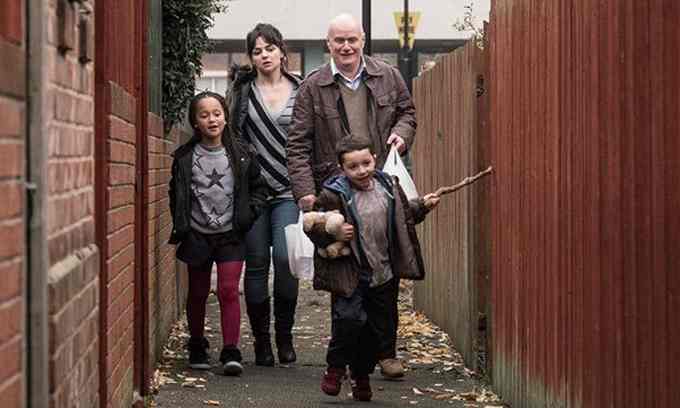 It seems appropriate that a British auteur with his own particular brand of social realism should still return at 80, to a Film Festival that, at 69, still prides itself with being about the art of film rather than just the money. THE CANNES COMPETITION line-up is still gloriously auteur-driven; but you may never get to see these arthouse films at your local cinema- apart from the Palme d’Or winner, naturellement. That’s why Woody Allen, a treasured regular at Cannes still brings Red Carpet glitz and the big crowds. His festival opener Cafe Society (out of Competition) is a romantic comedy and social satire of America in the 1930s, will definitely be coming to a cinema near you.

But back to Ken Loach and this latest film that arrives a decade after he won the Palme d’Or for The Wind That Shakes the Barley and two years after he brought Jimmy’s Hall to Cannes. This is a story about an decent man, another auteur, but this time one who crafts wood, and suddenly finds himself in his fifties having to fall back on the Welfare State due to a heart attack, after years of self-employment as a joiner. His life of using his hands comes to an abrupt halt – “I can build you a house, but I can’t use a computer” –  and he feels demoralised and smoulders with quiet desperation at having to deal with the social services and a grim breed of people called ‘medical professionals’ and’ decision-makers’ instead of his regular normal customers in his Newcastle home.

Loach works with his regular co-writer Paul Laverty in this bleak but trenchant indictment of  the British Welfare System where Daniel Blake, a Geordie, is played by stand-up comedian Dave Johns. The only score is that stalwart of ‘on-hold phone lines – The Four Seasons –  but the dialogue is humorous and fraught with Geordie expressions.

Blake is a self-reliant bloke but soon he is smouldering with resentment at the humiliating situation of having to sign on for benefits having been warned by his doctor about retuning to work. Loach often offers a didactic approach which is occasionally moving and sparked with fierce humour, although the support characters often feel typecast into the nasty government types versus the compassionate underdogs. When Daniel sees a young mother (Hayley Squires) of two being denied basic support for missing her appointment slot, an unlikely friendship develops and he offers to help with the kids and odds jobs around her council flat. Although the mother’s story occasionally veers into the realms of mawkish melodrama, Daniel emerges as the hero, a truly likeable bloke mourning the death of his wife as he deals with the Kafkaesque absurdity of form-filling red tape that most of us will thoroughly identify with. Although the finale feels rather uncharacteristic in the light of Daniel’s previous sensible attitude it will certainly appeal to those who have reached the end of their tether with bureaucracy or share Loach’s signature political affiliations. It will no doubt be Jeremy Corbyn’s film of the year.

So six months down the line, after a revisit, I’m still with Robbie Collin on his Daily Telegraph review: “the award (Palme d’Or) sat awkwardly with a few critics, including myself, who felt the film’s determination to more or less frogmarch its audience around to its way of thinking felt less like the stuff of great cinema than the party political broadcast – although doubtlessly Loach and his long-time collaborator, the screenwriter Paul Laverty, would respond that right now, explicitly partisan left-wing politics is exactly what cinema needs.” MT

In celebration of Ken Loach’s 80th Birthday in June 2016, Dogwoof and the BFI support a film by British documentarian Louise Osmund: VERSUS: The Life and Films of Ken Loach |